Tag Archive for: The Kurdish Project 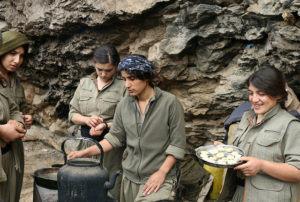 Scattered throughout the mountainous regions of Turkey, Iraq, Syria, Iran and Armenia, the Kurds are known as one of the largest ethnic groups without a state. Totaling about 35 million, 20 million of these Kurds live in Turkey, making it the largest Kurdish population within a state’s borders. Despite the significant size of the Kurdish population in Turkey, most  people in the U.S. and abroad don’t actually know what’s going on and how non-governmental organizations (NGOs) are helping the Kurds of Turkey.

Since 1984, Turkish authorities and the Kurdistan Worker’s Party (PKK) have been interlocked in a gruesome conflict. Labeled as a terrorist group by most of the international community, the PKK has engaged in terrorist and guerrilla tactics in the hopes of establishing a free Kurdistan in southern Turkey. In response, Turkish forces have unleashed a brutal and destructive counter-terrorism campaign in the South.

Basic human rights — such as minority rights, freedom of the press, freedom of assembly and freedom from torture — have been frequently violated by Turkish forces; which can be found here on the U.S. State Dept’s page.

In 2015, it is estimated that between 15 percent (official Turkish government numbers) and 40 percent (private estimates) of the population in Kurdish-majority areas are unemployed. In fact, a study by the International Terrorism and Transnational Crime Research Center found that 4 out of every 5 PKK militants were unemployed at their time of recruitment.

The Turkish government attempted to re-finance the Southeastern Anatolia Project (GAP) by pumping money into projects — such as dams, irrigation, agriculture and power plants — that focus on rebuilding war-torn infrastructure.

However, according to the Ministry of the Economy, two-thirds of the $309 billion went to already developed regions, such as Istanbul and Ankara, while the southeastern provinces only received a mere 5 percent of the total funds.

The largest city in the southern provinces, Diyarbakir, teachers’ union reported in 2008 that class sizes were up to 60 students per teacher with little to no funding for textbooks, facilities or classroom materials.

Moreover, most of Kurdish students grow up speaking only their native Kurdish language; however, the Turkish government only allows the use of Turkish as the official language in schools. Therefore, many teachers experience language barriers while trying to educate and teach.

While around 800,000 students graduated from the Diyarbakir region, only about half had employment readily available, and around 0.1 percent went on to a university.

It is clear that the people of southeastern Turkey (primarily Kurds) are suffering from severe disparities in education, employment, security and infrastructure compared to the rest of Turkey. While the Turkish government has implemented projects on paper, actually turning funds and promises into solutions have not shown much progress in helping the Kurds of Turkey.

The Path to Peace: The Kurdish Project

Through education and awareness, the members of the project hope to bring peace and stability to the Middle East by sponsoring local and international NGOs that focus on helping the Kurds.

Keep in mind, Turkey and the U.S. share a strong relationship and partnership in Middle Eastern affairs. So, emailing, calling and meeting with representatives in support of helping the Kurds of Turkey could go a long way to pressuring the Turkish state to change its methods.

Change shouldn’t be thought of as too far way in this situation. In fact, Erdogan himself stated that: “If we solve this problem [the conflict with the PKK], then investments can boom.”

Although he has frequently leaned toward brutal crackdowns in the southeastern provinces, economic aid, not military force, is recommended by the Washington Institute. If security forces are applied to more constructive projects, such as rebuilding infrastructure and protecting civilians, then the Turkish government can make significant headway to bringing peace within its borders.

After all, rebuilding the southern provinces will not only be helping the Kurds of Turkey, but also the rest of the Turkish state as peace and prosperity overcome conflict and poverty.