Tag Archive for: The Khmer Rouge 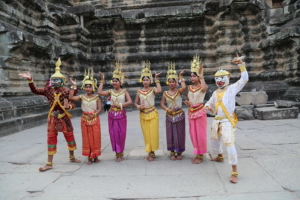 Over the last decade, poverty reduction in Cambodia has successfully reached and exceeded governmental goals. Significant economic growth and an increase in earnings allowed Cambodia to reduce poverty by more than half since 2009.

History of Poverty and Instability in Cambodia

In the 1970s, the Khmer Rouge, a communist movement, took control of Cambodia. Through a five-year civil war, it was able to gain control of the country, maintaining control for the following four years.

The ultimate goal of the Khmer Rouge was to transform Cambodia into an entirely agrarian state, and it did this by slaughtering anyone perceived to be an intellectual and by emptying the country’s cities. The Khmer Rouge movement killed hundreds of thousands of Cambodians during the four-year period that Khmer Rouge had control, and even more people died from disease or starvation.

Despite a short four-year reign for the Khmer Rouge, 30 years of violence and instability followed. Cambodia now had to recover from a massive genocidal effort, the effects of which resulted in as much as 40% of the population still in poverty by 2009.

Following the fall of the Khmer Rouge, Cambodia underwent the daunting task of reopening itself to the international market and rebuilding its governmental structure. According to the World Bank, “Cambodia’s open borders to international trade and investment have helped attract foreign direct investment to support manufacturing, construction, and tourism.” Such efforts have resulted in consistent economic growth.

The Cambodian government has committed to revising its poverty line procedure every 15 years. This is necessary because rapid economic growth requires consistent reevaluation of poverty standards and allows the government to better monitor poverty reduction in Cambodia. The current poverty line requires someone to earn less than $2.70 a day to be considered in poverty.

Additionally, a new cash transfer program launched in June 2020, benefitting around 2.8 million Cambodians. This program demonstrates the continuous and novel efforts of the Cambodian government toward once again creating economic and political stability throughout.

As a result of the aforementioned efforts, around 17.8% of the Cambodian population was in poverty as of 2020, compared to 40% in 2009. This means that in just over a decade, poverty in Cambodia has reduced by more than half.

The Cambodian government has successfully exceeded its poverty reduction goals. While it committed to an annual 1% decrease, it has achieved an annual 1.6% decrease.

Quality of life factors has also improved. According to the World Bank, “from 2000 to 2017, life expectancy increased from 58 years to 69; the under-five mortality rate decreased from 107 to 29 per 1,000 live births; and primary school completion rate increased from 51% to 90%.”

Efforts in poverty reduction in Cambodia over the past decade have been overwhelmingly successful. A combination of international trade and government oversight has allowed for economic growth within Cambodia, increasing stability for those living there. The results reflect significant reductions in poverty across the country.