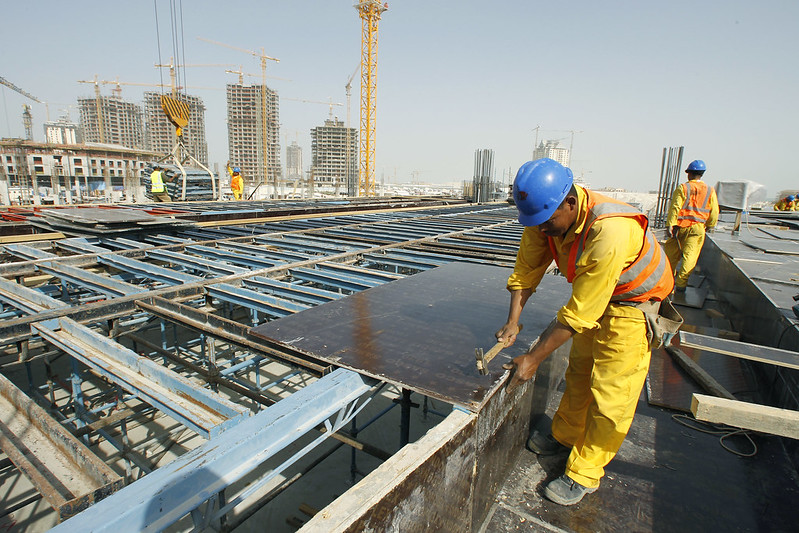 Spontaneous celebration swept Qatar in 2010 after the FIFA governing body awarded the country the right to host the 2022 World Cup. The small gulf country is now set to host the world’s most expensive World Cup with more than $200 billion in infrastructure spending. Qatar has undertaken the building of a new airport, seven new stadiums, the expansion of metro lines and the laying of new roads to accommodate more than a million tourists expected to attend the games. With more than a decade of labor going into preparations and more than $17 billion in projected economic benefits to the Qatar economy, the 2022 World Cup is a massive undertaking with a big payout. Few recognize the extent to which the migrant workers in Qatar are responsible for making this all happen.

About 30,000 migrant workers have undertaken the task of erecting these state-of-the-art stadiums, most of whom traveled from Asia and Africa in search of greater economic opportunity. Even after the stadiums are complete, migrant workers will be responsible for the day-to-day service operations and hospitality provided to guests of the World Cup. The long-awaited thrill of the soccer games themselves and the economic output that the events will provide for Qatar would not be possible without the hard work and sacrifice of these impoverished migrant workers in Qatar.

However, Amnesty International reports that these workers endure exploitation despite their vulnerability and necessity to the project. Individuals are subjected to high debt procured while trying to cover illegal recruitment fees. For example, about one-third of the Qatari foreign labor force consists of Nepali and Bangladeshi migrants whose typical recruitment fees amount to around $4,000 each — a debt that takes a minimum of 12 months to pay off.

Another practice that has received increased scrutiny as World Cup preparations are underway is the protracted non-payment of wages. This is a particularly distressing issue considering that workers must make payments on the loans they took out to cover recruitment fees. Many workers are also responsible for family members back home, who rely on them financially. Amnesty International found that thousands of workers have endured underpayment or no payment at all for months and sometimes years.

In 2019, hundreds of migrant workers in Qatar took part in protests over these practices and the generally poor working conditions.

Key to this exploitation is the “kafala” legal system of labor, in which private companies and employers can sponsor migrant workers, providing housing in dormitories and covering foreign relocation expenses. These migrant laborers are bound to their sponsoring employers and cannot quit, change employers or leave the host country without their employer’s permission. Workers cannot join trade unions either.

The good news is that in 2017, Qatar signed a treaty with the United Nation’s International Labour Organization, promising reform. Qatar lived up to that promise through the passing of several pieces of legislation. In 2018, the country ended the requirement that migrant workers obtain permission from their employers to leave the nation, and in 2020, Qatar undertook further reform to allow all migrant workers to change jobs without their sponsors’ permission and introduced a minimum wage.

In March 2018, Qatar also established Committees for the Settlement of Labour Disputes to stand in place of the country’s “ineffective [labor] courts.” These Committees guaranteed that workers would receive their judgments from the court within six weeks. Qatar also established a “workers’ support and insurance fund” for exploited workers who do not receive payment from their employers.

The Story of Bijoy

However, the promise of these reforms has not quite panned out as desired as courts are overwhelmed with cases and processing times are backed up. Amnesty International’s reporting on Bijoy’s story captures the human toll of this bureaucratic backlog.

Bijoy is a migrant worker from India who worked for three years at a Qatari construction company. Bijoy had more than $3,500 of unpaid wages owed to him by the company. He waited three months to have his claim processed by the labor committee, living in conditions of squalor with no money. Finally, after seven months of non-payment, Bijoy accepted just $275 and ticket fare for a flight to India as compensation as he had a sick father to return to in India. Stories like Bijoy’s are unfortunately all too common.

As the November 21 World Cup 2022 kick-off date approaches, excitement is building around the world as audiences prepare to experience the culmination of years of planning and effort. However, Amnesty International is advocating that FIFA and the Qatari government refund recruitment fees and compensate individuals for abuses before the footballing celebrations move forward. Amnesty International recommends that FIFA set aside $400 million out of the $6 billion in expected revenue, almost equivalent to the total prize fund for the World Cup, for these purposes. Amnesty International continues to push for a commitment to compensation from Qatar and FIFA, hopeful that Qatar will, as it has done in the past, implement the reforms and restorative justice necessary to uphold the rights of migrant workers in Qatar.