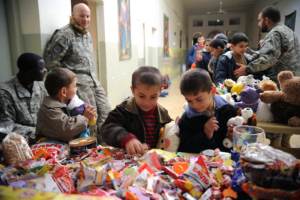 Iraq’s youth stand as one of the most vulnerable yet valuable populations in Iraq’s war-torn nation. The humanitarian crisis in the conflict-ridden country of Iraq has led to a poverty rate of 24.8% as of March 2021. One of the most tragic consequences of the conflict and violence in Iraq is the fact that, in 2012, there were almost “2.5 million Iraqi orphans.” Although these statistics stem from the time of the brutal Saddam Hussein regime, the situation regarding orphans in Iraq remains dire. Currently, Iraqi Children’s Hope indicates that there are 700,000 Iraqi orphans.

To put the situation in perspective, one must note that in 2020, Iraq’s age 0-14 population stood at 37.02% of the total population in contrast to 7.53% of the population in the age category of 55 and older. Just as a comparison, 18.37% of the U.S. population is in the 0-14 age range, and, in 2014, more than 34% of U.S. citizens were 50 and older. Because Iraq’s youth make up a significant portion of the population, Iraqi children stand as essential human capital amid a dwindling older generation. Yet, millions of Iraqi orphans often have no support system and no shelter, making them susceptible to the lure of trafficking and a life of crime. This fact coupled with the statistic that almost “3.2 million school-aged Iraqi children [are] out of school” means that support to Iraqi children must become a priority.

However, with Iraqi orphans in mind, three nonprofits are working to alleviate the impacts of the last 40 years of conflict.

Iraqi Children’s Hope works directly with Iraqi orphans, “enabling them to thrive educationally and economically” to ensure a better quality of life and lessen the impacts of poverty and war. The organization “prioritize[s] orphans who cannot afford to attend private schools or pay tutoring fees” through the Children Tutoring for Success program. The program supports “orphan students in grades 1-8 through homework assistance and various other academic needs.” Iraqi Children’s Hope also focuses on food drives for widowed mothers and orphaned children. For example, during Ramadan 2021, an Islamic tradition in which families fast from sunrise to sunset, the Iraq branch distributed more than 700 food packages to orphan families and other families in need.

The United Kingdom-based Iraqi Orphan Foundation emphasizes supporting vulnerable groups through forms of humanitarian aid and advancing the education of Iraqi orphaned youth. The foundation reaches children across several towns and cities in Iraq. Through its Sponsor an Orphan program that prompts individuals to donate a minimum of £20 per month per child, the Iraqi Orphan Foundation has supported more than 6,000 orphans. In 2019, the organization raised more than £560,000 in donations to support Iraqi orphans. The organization also focuses on direct food distribution for children without sponsors. For Ramadan 2021, the organization distributed “more than 400 food parcels to the families of orphans.”

Iraqi Children Foundation (ICF) commits to supporting at-risk Iraqi children “who are vulnerable to abuse, neglect and exploitation by criminals, traffickers and extremists.” Its scope includes orphans. One of its unique programs is the Hope Bus where volunteers transform an old bus into a lively, child-friendly classroom. Each bus provides about 50 orphans and street children “with tutoring, nutrition, [health support], social services and childhood fun.” Each child participates in the Hope Bus program for a year in preparation for a traditional school. More than 500 children have attended the Hope Bus so far. The program has provided more than 36,700 healthy meals to students and all 2020 graduates “now have their legal documents.”

Children make up 25% of all human trafficking victims. Orphans, often without protection or security, are the most vulnerable to trafficking. About 168 million children around the world end up as child laborers with 50% coerced into hazardous work that damages physical and mental well-being. Human trafficking is difficult to track as less than 0.5% of cases are reported. From May 2016 to April 2021, ICF provided “legal protection and defense” to 1,469 children.

An example of ICF’s extensive impact is the story of Ahmed. Ahmed and his widowed mother earn an income by selling milk from their cow. One day, instead of selling the milk, he shared the milk with the Hope Bus children. This type of generosity despite poverty is a testament to the impact of ICF’s work.

The impacts of Iraq’s political turmoil affect Iraqi children most severely, especially Iraqi orphans. However, there is hope as nonprofits commit to addressing the void in government efforts by supporting the nation’s children, ensuring a brighter future for the youngest generation.