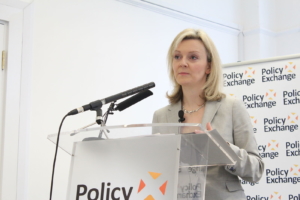 Britain has experienced major changes in recent days, with entirely new faces of leadership in the monarchy and government. In the same week, Queen Elizabeth II peacefully passed away in Balmoral Castle and the United Kingdom’s Prime Minister Boris Johnson stepped down, allowing for Liz Truss to take his place as the leader of the Conservative Party and head of the government. This will have implications on the U.K’.s foreign policy, poverty and general political affairs. Understanding the new Prime Minister’s political experience is necessary to predict her policies regarding poverty and the rising costs of living in recent years under former Prime Minister Johnson.

As a college student, Truss openly opposed then-Prime Minister Margaret Thatcher’s policies and the institution of the British monarchy. During college, she served as “an activist for the centrist Liberal Democrat Party,” according to NBC News. Upon her graduation from Oxford University in 1996, she switched to the Conservative Party and ran as a Tory candidate in 2001 and 2005. She then became a Member of Parliament for South West Norfolk in 2010.

In addition to her position in the Parliament, Truss has held many offices and titles in U.K. politics that show her dedication and passion for issues in economic and environmental stability, women’s rights and food industries.

Despite the new Prime Minister’s shifting opinions and positions over the years that led people to question her loyalty and authenticity, her campaign to return to fundamental Conservative values, such as lower taxes and shrinking the state, appealed to her party members. The nation hopes she can restore Britain’s reputation and allow for a fresh start following former Prime Minister Johnson’s time in office when the British government was riddled with scandals and tumult.

Since the Ukraine-Russia war, Britain has struggled with an energy crisis and economic challenges, which partially contributed to Johnson’s resignment in the first place. The inflation rates are the highest Britain has seen in the past 40 years, with costs of gas and electricity hitting record-breaking numbers.

Since the 1980s, U.K. inflation remained below 10% but increasing prices of energy, food and basic essentials have sent the rate to 10.1% as of July 2022. The Bank of England expects the rate to rise up to 13% in October 2022 after the Office of Gas and Electricity Markets (Ofgem) implements an energy price cap increase. Energy bills are rapidly increasing as experts expect the energy price cap to increase by 80% from October following Ofgem’s actions, bringing the annual energy bill to a total of £3,549 for an average household.

The price of wholesale gas also poses a problem for Britain with uncertainty and instability looming. The Russia-Ukraine war has put pressure on most of Europe’s gas market and Britain is no exception. President Vladimir Putin has reacted negatively to the EU price cap and threatened to cut off Russia’s energy supply to Europe if the EU imposes the price cap on his supply.

Limited fuel and energy have exacerbated living conditions among vulnerable lower-income households, leaving 30% of households in the West Midlands living in fuel poverty. The End Fuel Poverty Coalition predicts that by this winter, 6.9 million households in the United Kingdom will face fuel poverty. Such a drastic drop in living standards with plummeting disposable incomes has threatened the overall health, economy and stability of Britain.

Despite issues pertaining to energy, gender equality, international aid and foreign relations, the public is clinging to hope for the new Prime Minister to improve conditions in the country. Her determination and dedication to the U.K. are clear, considering her heavy involvement in politics since her youth. She has demonstrated a clear commitment to NATO and the Group of Seven, ensuring the U.K. remains “an effective leader” on a global scale, which bodes well for the future of the U.K.’s international affairs.

Despite previously being outspoken on “lowering the tax burden, not giving out handouts,” Truss has made considerable efforts to support the struggling British population with their energy bills. She has plans to freeze the cost of gas and electricity and cap the average bill at around £2,500 annually, but it is predicted that high-income households with larger bills would benefit most.

Questions also remain about the funding for such a project, with estimates ranging around £180 billion, which will also become a burden for taxpayers in the long run. Still, the plan is expected to decrease the severity of a recession and provide support for those struggling in the cold winter.

The UK as a Global Powerhouse

The U.K. budget once stood as the most influential and resourceful in supporting education for women, battling polio, providing food rations and restoring living conditions in many underdeveloped countries. However, following the beginning of the pandemic in 2020, the U.K. cut the budget for the Department for International Development from 0.7% to 0.5% of the gross national income.

During her time as foreign secretary, Truss launched the International Development Strategy to focus on humanitarian commitments and investments in foreign economies. The British are hopeful that Truss will continue her advocacy to ease the burden on impoverished households and increase funding commitments for foreign development aid.