Tag Archive for: The Institute of German Economic and Social Research 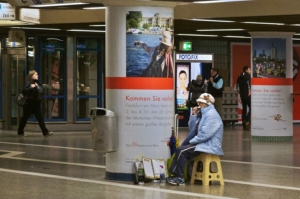 Germany’s economy is booming. Since reunification, the unemployment rate has steadily decreased and Germany has turned itself into one of the richest countries in Europe. Nonetheless, poverty in Germany remains a potent issue. In 2018, more than 15% of people in Germany were impoverished. Here is some information about the country’s poverty rates as well as its plan to eliminate poverty in Germany.

The Rise of Poverty in Germany

Despite the country’s economic success in manufacturing and trade with the European Union (EU), people at risk for falling into poverty rose over the past decade in all western German states and in Berlin. The Institute of German Economic and Social Research defines the poverty line as a 60% median net income. The poverty line also has risen from 736 euros a month in 2005 to 999 euros a month in 2017 and 1074 euros in 2019.  Similar increases occurred for families, also.  In fact, 20% of German children experience poverty. Further, two-thirds of German children who are poor experience long-term poverty.  The above percentages only represent households in Germany and do not include those living in refugee camps who may be experiencing poverty. As of 2019, Germany had more than 1 million refugees living within its borders.

Impoverishment does not affect all regions of Germany equally. Southern Germany, the least impoverished area of the country, still has a rate of about 12% for people at risk of poverty. The northern states have the highest percentage of people at risk with Bremen, a city in that region, having a shocking 24.9% rate.

This inequality is largely attributed to the Ruhr region, a highly industrial area in Northern Germany. The Ruhr is the most densely populated region in the country, with production focusing largely on coal, steel and chemical manufacturing. During World War I and World War II, the Allied bombing destroyed nearly 75% of the region. Since then, Northern Germany has experienced long-term impoverishment that continues to contribute to the growing poverty rate.

Germany is aware of the economic inequality facing many of its citizens. It is continuously creating more jobs and working towards a stronger economy. Additionally, Germany also raised its minimum wage in 2015 to 8.50 euros an hour.  It also increased social welfare for refugees. The country has also strengthened support for vocational training in an attempt to increase the amount of employed low-skilled workers.

Poverty in Germany is a pertinent issue. Despite the country’s wealth and economic growth, the rate of poverty continues to rise. Although the issue of impoverishment may seem overwhelming, the German government continues to persist and develop programs designed to eliminate poverty in Germany.