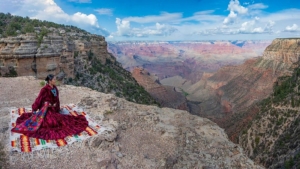 Creating accurate and culturally sensitive maps gives Indigenous communities respect and anchors them in their traditions. While there is a long history of erasure within Indigenous lands, mapping legitimizes their claims in the eyes of surrounding governments. This is particularly important when it comes to the preservation of this land, as well as the livelihoods of the Indigenous peoples who inhabit it.

Drones have become a remarkably efficient means of mapping hard-to-reach areas and the true borders of Indigenous claims to land. They are small, easy to use and can store data electronically. The geographic information systems (GIS) that are in drones can help build virtual maps. Additionally, individuals and large-scale projects alike can use drones.

The Power of Land Mapping

The possibilities are endless when it comes to drone use in Indigenous land mapping. The kinds of information gathered from electronic land mapping have implications for development, health and equity.

In Panama, the Indigenous Guna people have been in the throes of a housing crisis, coupled with land shortages and the devastating impacts of environmental changes. Relocation has long been a source of violence for Indigenous people. However, a partnership between Guna community leaders and Panama Flying Labs allowed the Indigenous community to survey their land and make their own decisions about their futures, UAV Coach reported.

Peru and Guyana have also been home to many Indigenous drone mapping projects, whose main outlooks for the future include environmental protection opportunities and the defense against illegal expansion projects.

Given power over their territories, they can be more informed about how to utilize their resources and better protect themselves from illegal government action. Land mapping alone is important in achieving these goals and the use of drone technology makes it that much more accessible and intuitive.