Tag Archive for: The Importance of Foreign Aid 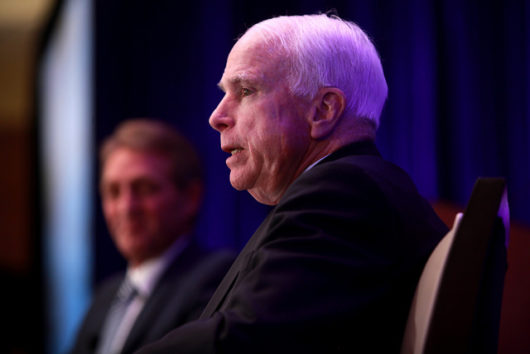 On August 25 2018, Senator John McCain passed away at the age of 81 from a year-long battle with brain cancer. He had served in The U.S. Senate for over 30 years. During his tenure as an Arizonan Senator, he earned the title of a Maverick because of his service in the navy and his willingness to act independently from The Republican party. One of the most famous instances of this was his choice to vote against the repeal of The Affordable Care Act.

He left behind him a complex voting and ideological history that included John McCain’s legacy with foreign aid. While he was a strong believer in defense spending and military intervention, he was a strong supporter of foreign aid spending as well. To McCain, one of the best ways to ensure America’s safety was to invest in other countries.

One of the best examples of John McCain’s legacy with foreign aid was in 2017. President Donald Trump’s budget plan for 2018 included cuts to foreign affairs spending, which includes foreign aid. The cuts totaled roughly $18 billion. One of the countries that would have suffered the most was the small North African country of Tunisia. In 2016 the country had received $177 million dollars; in the new budget, they would receive only $54 million dollars.

Sen. McCain spoke against the proposed cuts, wrote several opinion pieces and released a joint memo with Sen. Tim Kaine. In a forum, Sen. McCain promised that funding towards Tunisia would be restored. Funding to Tunisia is important because several Tunisians had been recruited into ISIS and many would return as ISIS lost territory in Syria and Iran. Sen. McCain asked, “haven’t we learned our lesson?” He also cited that Tunisia was important in the fight against ISIS and that cutting foreign aid to Tunisia was both “misguided and dangerous.”

A Memo to Congress

On June 15, 2017, Sen. McCain and Sen. Kaine released a joint memo urging Congress not to cut foreign aid. At the beginning of the article, McCain and Kaine used a famous quote from James Mattis, who now serves as the Defense Secretary under President Trump, “if you don’t fully fund The State Department, then I need to buy more ammunition.”

The memo cited that helping developing countries is one of the best routes to achieving a safer world. It states, “[s]uch cuts will make it harder to make America safer”. It also discussed how improving economies in developing countries can help improve the United States economy because it creates more of a demand for American goods and services.

The memo backs this claim by examining how aid in Africa paid off. “By improving their plight, we improved opportunities for our exports and investments.” A majority of the world’s fastest growing economies are now in Africa. It also addressed some of the misconceptions surrounding foreign aid, including that, in reality, The United States only spends roughly 1 percent of the budget on foreign assistance.

Following Sen. McCain and several other Congressional leaders’ dissent, the Trump Administration did not cut the foreign aid budget nearly as much as it intended to. The foreign affairs budget was only cut by roughly $4 billion instead of the proposed $18 billion.

Sen. McCain’s defense of foreign aid helped stop the President from severely cutting spending. While he was once considered a Warhawk, he understood the importance of foreign aid as another tool of defense for The United States. John McCain’s legacy with foreign aid will remain as an example long after his passing.