Tag Archive for: The Future of Hope 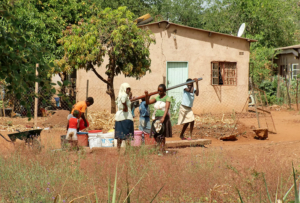 Rates of food insecurity in Zimbabwe have been on the rise since the COVID-19 pandemic began in the fall of 2019. Internationally, food prices have increased by about 38% since January 2020. Some household food staples, including corn and wheat-based products, have increased by as much as 80%. The World Food Programme (WFP), an organization that supplies aid for countries struggling with malnourishment, estimated that by April 2021, an additional 111 million people would be malnourished because of COVID-19. For Zimbabwe, a country already facing large amounts of food insecurity before the pandemic, the increase in food prices has only added stress to its acute hunger crisis.

Voice of America (VOA) recently reviewed a report from the government of Zimbabwe on the country’s rising food insecurity. The report revealed that about 2.4 million Zimbabweans who were not food-insecure pre-pandemic are now struggling with food insecurity. The food scarcity problem is especially difficult for members of Zimbabwe’s urban communities. In urban centers, misinformation about the virus was rampant during its initial spread. Many urban Zimbabweans received conflicting information about COVID-19, increasing the number of cases.

Like many sub-Saharan African countries, Zimbabwe also struggled to counter the virus because healthcare facilities are typically under-resourced or too expensive for many residents. Many urban Zimbabweans lost their jobs during the peak of COVID-19 and have struggled to find consistent work since, only increasing the cases of food insecurity.

Although international aid organizations and the government of Zimbabwe have indicated that plans are emerging to help combat the growing hunger crisis, many Zimbabweans have taken matters into their own hands. The way they are fighting food insecurity is by growing mushrooms.

One Zimbabwean who lost his factory job during the pandemic, Murambiwa Simon Mushongorokwa, said that growing mushrooms was keeping him and his family members afloat. “I used to get about $30 a week. It was not enough for my needs. But when the lockdown came, it got worse, until I started growing mushrooms. It’s slowly improving my life,” said Mushongorowka.

Others are following Mushongorokwa’s lead. Several nonprofit organizations, including the World Food Programme (WFP), have begun teaching other Zimbabweans how to grow mushrooms. The Future of Hope is another such organization. The Future of Hope has been able to provide Zimbabweans with additional income that has improved their situation. Simon Julius Kufakwevanhu, an official from The Future of Hope, has been teaching about the benefits of mushroom farming. Kufakwevanhu stated that “Before the introduction of mushroom farming in this place, it was very tough for people in this community to survive because of the lockdowns and so forth. But when The Future of Hope brought in mushroom growing, it’s changing because you can now buy something, able to go to shops and buy mielie meal [coarse flour], sugar and so forth. Even if I fall sick I can go to the hospital after selling mushrooms.”

Mushroom growing has proven to be a viable way to fight food insecurity in Zimbabwe. According to the WFP, over 700 mothers have received training in the past few months. The process allows the mothers to grow their own mushrooms and to pull their families out of food insecurity. The WFP plans to expand the mushroom classes in the future.