Tag Archive for: The Free University for the Environment 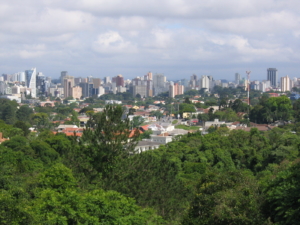 Sporting a population of 1.9 million, Curitiba is Brazil’s eighth-largest city. Many also tout it as one of the greenest cities in the world, earning praise for its eco-friendly urban planning. Curitiba’s creative, environmentally friendly solutions to urban planning issues have been effectively alleviating poverty in the city. Curitiba has also done well curbing emissions and protecting the area’s biodiversity. This is a quick look at the story of sustainability in Curitiba, Brazil.

Curitiba has had a long and rich history. From a “sleepy” city surrounded by farmland to a hub for European immigrants in the 19th century, Curitiba, the capital of Brazil’s state Parana, was long a cultural and economic center in the region. The mechanization of soybean agriculture in the 1940s was a turning point for Curitiba. Within a span of 20 years, the population of the city doubled, leaving Curitiba a hectic and polluted municipality. This changed in 1972 when Jaime Lerner became mayor of Curitiba and instituted his plan for a sustainable city.

Not only has Curitiba’s creative urban planning helped it become one of the world’s leading green cities, but it has also resulted in poverty alleviation and population growth. Its 30-year economic growth rate is 3.1 percent higher than the national average, and its per-capita income is 66 percent higher. In the last 60 years, the population of Curitiba has increased by 1,000 percent to a staggering 2 million people due to this. With such a quick population rise and migrant population, one would expect a great deal of wealth inequality and poverty within Curitiba. Indeed, 10 to 15 percent of Curitiba’s population lives in substandard housing. However, this is a trend that Brazil’s other large cities and affordable housing plans match. The city’s above par per-capita income is also evidence of this. These numbers are likely to lower and help Curitiba continue its mission of poverty alleviation and environmental sustainability.