Tag Archive for: The Fight Against Locusts 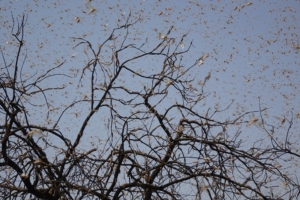 Asia, the Middle East and Africa are in a battle with an entity that threatens the food security of 10% of the population. This problem has come and gone before and goes by the name of the desert locust. These locusts fly in swarms of 10s of billions, in coverage ranging from a square third of a mile to 100 square miles. For reference, a swarm the size of one-third of a square mile could eat the equivalent of 35,000 people.

The leading cause of the sudden outburst of locusts is the months of heavy rain that Africa and Southwest Asia had towards the end of 2019. Locusts thrive in wet conditions when breeding and the rain sparked a massive emergence of the bugs.

The locusts could become the cause of food insecurity for millions of people. The reason for this is the sheer number of insects and also how quickly they can travel. They swarm from one food supply to the next, while moving from one country to the next within days. When they decide to land in a town or city that seems to have an abundance of crops, they will eat anywhere from 50 to 80% of all the plants. This has resulted in many countries and international institutions increasing cooperation, as the locusts do not discriminate against which country they deplete of resources. Below are five of the ways that collaboration has developed in the fight against locusts, which highlights the importance of working together during national emergencies.

5 Cases of International Cooperation in the Fight Against Locusts

The cooperation between organizations and countries in the fight against locusts proves to be the silver lining of the infestation. International institutions are effectively planning, tracking and coordinating efforts to minimize the problem for farmers and food-insecure people around the world.