Tag Archive for: The European Parliament 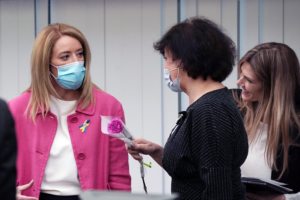 In the European Union, women are at greater risk of experiencing poverty. The poverty rate among men averages 20.4%, whereas the poverty rate among women is 22.3%. This difference increases in older age groups. Since 2017, the gender poverty gap has increased in 21 EU member states.

U.N. Special Rapporteur on extreme poverty and human rights, Olivier De Schutter, has attributed much of this difference to varying expectations for men versus for women. He has found that households often divide labor in a way that makes it difficult for women to seek full-time employment, U.N. News reported. Because women often spend more time taking care of children, they often can only work a part-time job. He also noted that women head the majority of single-parent households and that up to 40% of them face poverty.

The COVID-19 pandemic has only increased these obstacles. In fact, De Schutter noted that the crisis has caused many women to have to give up full-time jobs. Additionally, school closures have an impact, as women take care of children more than men within the European Union.

Another form of poverty that disproportionately affects women is period poverty. Period poverty refers to the inability of one to access clean menstruation products. Across Europe, one in 10 menstruators experience period poverty. While some European countries, like Scotland and the Netherlands, have taken steps to alleviate period poverty and increase access to sanitary products, regulations vary greatly from country to country.

Vote on the Report

The report that the European Parliament put forth aims to take a gender-informed approach to alleviate women’s poverty in Europe. It received approval with a vote of 535 members of parliament in favor, 18 members against and 79 abstentions, the European parliament’s website reported.

The report sets forth three primary goals: to establish an anti-poverty strategy with a focus on women to reach completion by 2030, to prevent violence against women is essential to their participation in the labor market and to avoid discriminatory tax policies on women’s sanitary products.

Members of the European Parliament strongly encourage member states to provide support to women escaping violence. Without full independence and a life free from violence, it is difficult for many women to support themselves financially.

Members also call for use of cross-sector gender-neutral job evaluation tools to ensure women are receiving equal pay and fair assessments in their workplaces. They additionally recognize how increasing accessibility to basic childcare enables more women to earn an income, according to the European Parliament’s website.

Women’s poverty in Europe, which the pandemic has worsened, is the result of difficulties many women face in entering the labor market, compounded by a lack of accessible sanitary products. The European Parliament hopes to alleviate some of the pressures exacerbating poverty among women in its recent vote on this report.