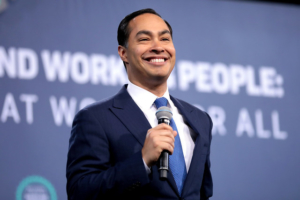 Presidential candidate Julián Castro has introduced many policies that he would implement during his presidency revolving around protecting indigenous communities, policing and education reform. One of the most pressing policies that Castro proposed revolves around immigration. With a three-part plan, Julián Castro is attempting to create an immigration policy that focuses on reforming the system altogether. However, one of the more ambitious parts of the plan deals with something he has coined as a 21st Century Marshall Plan for Central America. Julián Castro’s Marshall Plan could be a major step in solving immigration issues in both the United States and Central America.

Castro is no stranger to the world of politics. At a young age, he watched his mother run for San Antonio’s city council as the first woman of Mexican descent to do so. He learned the values of hard work and dedication from both his mother and his grandmother, who was an immigrant from Mexico that started her family with a fourth-grade education and a job as a housekeeper.

However, Julián Castro’s political career did not start when he decided to run in the 2020 presidential election. At age 26, he entered the San Antonio city council. Not only did he make history as the youngest councilman elected in the city, but he began his path to public service that would result in him becoming mayor of San Antonio in 2009 and then the Secretary of Housing and Urban Development in 2014. Along the way, he even became the first Latino to give the keynote speech at the Democratic National Convention in 2012.

In 1948, Europe had severly damaged infrastructure. World War II caused strain to Europe’s economies and disrupted agricultural production. To alleviate this issue, George C. Marshall created a plan to give roughly $15 billion to European countries. These countries used the money to rebuild cities and various economic industries for four years. In the process, these European countries and the U.S. created trade opportunities and development programs. The plan created substantial results across the continent. Industrial and agricultural production increased by over 37 percent and the overall balance of trade and economic stability improved as well.

The Marshall Plan differed from other aid programs during the time because it was a joint effort between many nations. The United States created the funding and programs that could benefit Europe, and the nations committed to implementing these programs. This plan benefitted Europe’s economic growth and reestablished the United States’ influence in the region after the war.

The Marshall Plan was also a way to test various programs concerning development and relief efforts. For example, the Economic Cooperation Administration’s model, designed to provide financial assistance to these European nations, was a model to create the U.S. Agency for International Development (USAID). Overall, the 20th century Marshall Plan was a major step in development programs that helped Europe drastically.

A Plan for Central America

In an NPR podcast, Castro describes the importance of working to rebuild Central America for multiple reasons. For one, it helps create stronger relationships with the U.S.’s neighbors to the south. By creating an alliance with these countries, the U.S. can continue being an economic competitor with China, which is on track to pass the U.S. in becoming the largest economy in the world by 2030.

Along with the economic benefits of strengthening a region with potential trade partnership, the second major reason for assisting Central America is immigration issues. Castro states that “…if we want to solve the immigration issue, we need to go to the root of the cause…and that is that people can’t find safety and opportunity in Central America.”

Central America is a region where large numbers leave to seek asylum from violence and corrupt governmental institutions. By 2015, nearly 3.4 million people born in Northern Triangle countries (El Salvador, Guatemala and Honduras) were living in the U.S., with over half being undocumented immigrants.

Julián Castro’s Marshall Plan would firstly target some of the root causes of violence in the Northern Triangle such as transnational criminal organizations and illicit networks. According to Castro, an increase in law enforcement programs would help eliminate criminal activities such as human and drug trafficking. Also, this plan would require a heavier focus on anti-corruption and government transparency practices. With the cooperation of leaders in Central America and the United States’ resources, the high rates of violence in the region can decrease and create safer environments and sustainable governments less susceptible to corruption.

His policy also provides more funding for programs designed to prevent violence at local levels, create jobs and support health and nutrition across Central America. By stimulating economic development through more sustainable jobs, it allows people to stay and grow their communities rather than leaving them to find better success in the United States.

The final major point that this candidate emphasizes is the importance of prioritizing diplomatic relations with Latin American countries. To ease the instability in this region, all nations have to become part of this plan. Cooperation between these nations and the United States will ultimately be the major stepping stone to creating safe and sustainable communities.

This major foreign policy proposal would only be one component of his push to tackle immigration, but his message stands clear throughout his campaign. Julián Castro’s Marshall Plan intends to put people first, and for millions of people living in Central America, that is something they can begin hoping for in 2020.