Tag Archive for: The Chin State 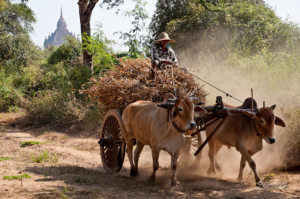 Agriculture is Myanmar’s most important sector and provides jobs for more than 60 percent of the population. Myanmar, formerly known as Burma, decreased its poverty rate from 48.2 percent in 2005 to 24.8 percent in 2017. One of the reasons for this huge reduction in poverty is its transition from a military-led government through economic reforms and development in sectors such as agriculture, finance, transportation and energy. The poor in Myanmar reside mainly in rural areas, and have poor education and employment in the agriculture field. By developing the agriculture industry, the government intends to continue to reduce its poverty.

A 2018 report launched by the Central Statistical Organization, with technical support from the UNDP and the World Bank, provided data on poverty in Myanmar and what the country needs to do to continually reduce poverty. The report acknowledged the success of reducing the poverty rate in half, yet brought up challenges in alleviating poverty in rural areas such as the Chin State. The Chin State is a state in western Myanmar with about a 60 percent poverty rate. Approximately 500,000 live in the Chin State. Since the poor in Myanmar have employment in the agriculture sector, the key findings show that the country can achieve poverty reduction by focusing its efforts on improving agricultural productivity.

Myanmar is the second-largest exporter of beans and pulses and the ninth-largest exporter of rice. In 2016 and 2017, Myanmar exported agricultural products worth more than $3 billion, yet productivity was less than neighbors such as Vietnam, Thailand and Cambodia. Low productivity has stalled poverty reduction in areas such as Chin State due to relying on crops that are expensive to maintain and less profitable than most other crops that endure the same climate.

How Exactly Can Myanmar Reduce Poverty?

Findings from a separate report delved into even greater detail about what Myanmar needs to do to improve agricultural productivity, and therefore, increase income for the poor in Myanmar. The report, Myanmar: Analysis of Farm Production Economics, stated that a single day’s harvest during the 2013/2014 monsoon season produced 23 kg per paddy. In comparison, Cambodia produced 62 kg, Vietnam 429 kg and Thailand 547 kg per day. Reasons for lower production of paddy than Myanmar’s competitors include poor seed quality, insignificant use of fertilizers and a lack of infrastructure.

The conclusion to the report mentioned the need for broad-based agricultural development, as most farmers in the country produce paddy and not much else. Paddy is more expensive to produce and less profitable than other crops in the region. A lack of infrastructure further impedes progress and causes farmers to seek employment in distant urban areas for higher wages. The poor in Myanmar could benefit from diversifying into low-cost crops, especially ones that can handle the typical monsoon weather that the country experiences.

The government and private investors are currently investing in Myanmar’s agriculture sector, particularly the growing fertilizer sector. Myanmar Awba Group received a $10 million loan from the International Finance Corporation to construct a chemical plant that will produce fertilizer. The Hmawbi Agricultural Input Complex opened in August 2018 and is expected to meet 50 percent of the demand for fertilizer in Myanmar. The demand for fertilizer has increased in the country, attracting investors from across the world. The Japanese conglomerate Marubeni Corporation invested $18.5 million in a fertilizer facility in the Thilawa SEZ.

Myanmar is also dealing with infrastructure, low productivity and poor seed quality this year, 2019. In January 2019, CITIC Corporation collaborated with Myanmar Agribusiness Public Corporation (MAPCO) to invest $500 million into constructing high-end rice mills and agribusiness service centers across Myanmar. Ye Min Aung, the Managing Director of MAPCO, said, “The establishment of the high-end rice mills will boost both the local and export market.” Thanks to foreign investors and government initiatives, Myanmar is seeing action in poverty reduction by focusing efforts on improving the agriculture industry.