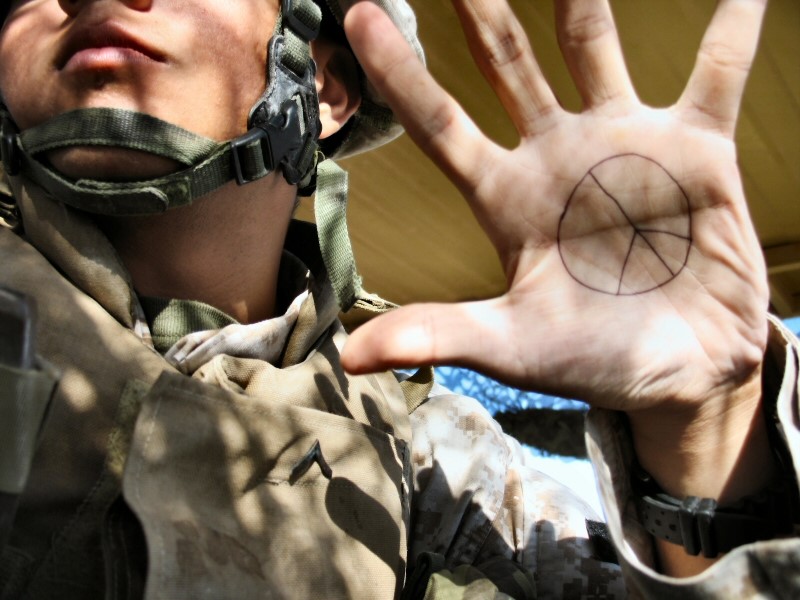 The U.S. spends nearly $649 billion on military defense with the budget set to grow for the fifth consecutive year in 2020. Meanwhile, 98 countries have decreased military spending, something the Global Peace Index has called the largest improvement for peace. Although people perpetuate militarization and war as necessary tools for peace and security, as well as a means to reduce the future threat of war, such ideals are not true.

According to the 2006 National Intelligence Estimate, during the war on terror, terrorism actually increased and spread. Several U.S. military commanders have made statements against war, claiming that violence and particular war tactics are actually creating a greater threat, not suppressing it. The former head of the C.I.A. Counterterrorism Center, Robert Grenier, stated that counter-terrorism strategies can backfire by helping form enemy alliances and therefore a larger threat.

“[Al Qaeda] are not just focused on helping oppressed Muslims in Kashmir or trying to fight the NATO and the Americans in Afghanistan, they see themselves as part of a global struggle, and therefore are a much broader threat than they were previously. So in a sense, yes, we have helped to bring about the situation that we most fear,” Grenier told Frontline.

Reports of a modern arms race have circulated for the past two years. Senior U.N. security expert, Renta Dwan, said the risk of a nuclear war is at its highest since WWII. There are over 13 thousand nuclear weapons in nine countries. Ninety percent belongs to the U.S. and Russia, yet using less than half of India and Pakistan’s arsenal is enough to cause a worldwide nuclear winter. A peace treaty banning nuclear weapons has only 23 of the 50 ratifications it needs to come into effect but the United States, Russia and other nuclear powers strongly oppose it.

Even if a nuclear threat had a low annual risk – as some claim – a group of physicians published an article for the American Heart Association arguing that experts need to think of the threat in terms of humanity’s lifetime. This is parallel to how cardiologists think of the cumulative risk of heart disease over a lifespan, not just within a given year. This means a one percent annual risk of a nuclear war translates to a 50 percent risk over a 70-year period. They claim that just as preventing heart disease requires behavioral changes such as losing weight, preventing nuclear war also requires a change in high-risk behavior, such as threats, sanctions and false accusations.

Changing the threat of war isn’t as unrealistic as it sounds. The European Union has established social institutions to deal with conflict between member states, and there are many global networks and health professionals working to end war as an institution. The first time the idea of ending the threat of war nearly came to fruition was during the Cold War, with the historical and ambitious US-USSR agreement in 1961, or the McCloy-Zorin Accords.

A World Without War

The McCloy-Zorin Accords outlined a detailed plan for a general and complete disarmament. Many agree that disarmament, international law enforcement and investment are all necessary to end the threat of war. Partial or full disarmament is a must, including selling weapons to countries that do not manufacture them but needs to be under the supervision of an international organization to verify the disarmament.

The accords specified that people carry the disarmament out in stages and that an international disarmament organization verify each stage. The accord recognized non-nuclear armaments, establishments and facilities as necessary for maintaining internal order, but called for the abolishment of weapon stockpiles, national armed forces, military establishments and the discontinuance of military budgets.

The accord also required simultaneous efforts to strengthen peace and international arbitration institutions. U.N. conflict management already resolves many conflicts, but better resourcing could maximize its impact. The World Court also resolves many interstate conflicts but does not recognize war as a crime. The accords are a gilded example of how to end the threat of war and prove its attainability.

Non-violent and civil disobedience campaigns have proven to be more effective in resisting tyranny, resolving conflicts and achieving security than violence. From 1900 to 2006, non-violent campaigns were twice as likely to succeed as violent rebellions across the globe. Non-violent campaigns are also more likely to usher in democratic intuitions and are 15 percent less likely to result in a civil war.

Even when non-violent resistance meets with violence, non-violence still prevails two-to-one. A major benefit of non-violent campaigns is how they tend to draw in larger and more diverse groups of people, but many of these campaigns usually happen without any training or support. If people better resourced such efforts and trained civilians, these campaigns could be even more successful.

Large and well-coordinated campaigns are actually able to switch from concentrated methods, such as protests, to dispersed methods when met with violence. Dispersed methods include strikes, stay-at-home demonstrations, a coordinated shut-down of electricity and even banging pots and pans. Dispersed methods, said Professor Erica Chenoweth, are “very hard or at least very costly to suppress, while the movement stays just as disruptive.”Chenoweth, a professor in Human Rights and International Affairs, believes that if history courses shifted focus onto the decades of mass civil disobedience that came before the Declaration of Independence, or if Mahatma Gandhi and Martin Luther King came first and not as an afterthought, then perhaps the “war culture” could change and end the threat of war.

The 2019 Global Peace Index reports that 104 countries recorded an increase in terrorism, while only 38 improved. Changing international policies and promoting civil disobedience instead of violence and war as a means for change does not only make movements of change more resilient but prevents terrorism and promotes stability.