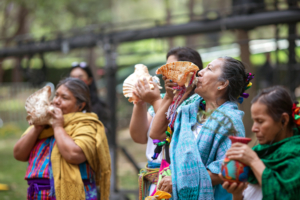 Microfinance is a form of banking that provides financial support to those who would not normally have access to conventional types of financial services, due to reasons such as unemployment and poverty. Microfinance also provides access to important financial tools such as insurance, funds and savings. According to a 2016 research article by Subhabrata Bobby Banerjee and others, microfinance “aims to alleviate poverty by providing the poor new opportunities for entrepreneurship. It also aims to promote empowerment (especially among women) while enhancing social capital in poor communities.” Although microfinancing has also led to negative outcomes for communities, when implemented responsibly, microfinance has significant poverty reduction potential. In particular, microfinance in Mexico has the potential to empower women and reduce gender inequality.

As it stands, Mexico falls behind in relation to financial inclusion. In Mexico, only 37% of adult citizens have bank accounts and only 32% have engaged in digital payment transactions. Access to a bank account provides individuals with the opportunity to use microfinance services. The World Bank outlines how Mexico’s current microfinance system is lagging behind countries at a similar level of development: “credit to the private nonfinancial sector was just 42% of GDP, far below the 143% average for emerging markets worldwide” in 2019.

Poverty and Gender Inequality in Mexico

According to the World Bank, almost 42% of people in Mexico lived under the national poverty line in 2018, equating to 52.4 million people. In some areas of Mexico, poverty is significantly high — in 2018, Chiapas, home to large numbers of Indigenous people, noted a poverty rate of almost 80%.

Gender equality also plays a role in poverty. Unemployment rates for women in Mexico are greater than those of men and pay for the same work is on average 22% less for women than men, according to a 2018 article by The Conversation.

Microfinance in Mexico can reduce poverty among women by providing the financial support required to decrease the gender inequality gap. Providing more access to microfinance for women and educating women on how to use microfinance most effectively is important. For example, a survey utilizing a hypothetical microcredit situation found that Mexican women would only invest about 6% of the money received through microfinance. To promote long-term growth in Mexico, this investment rate would need to increase considerably. This highlights the importance of providing more financial education.

Poverty in Mexico is amplified by the government’s poor provision of infrastructure and education. This has resulted in a large urban-rural inequality gap in education and wealth, especially for women in these rural areas.

There is an 8% difference in access to bank accounts by men and women in Mexico. This exacerbates the gender inequality gap as men have higher rates of access to financial institutions than women do. On top of this, 90% of the credit goes to urban areas despite more than 20% of adult Mexicans residing in rural parts of Mexico. Without aiming for financial inclusion among marginalized groups, these new financial institutions may exacerbate poverty in Mexico.

How Microcredit Can Help

Banco Compartamos currently has 180 branches in 29 Mexican states. This demonstrates the bank’s goal of being accessible to all in Mexico. The institution noted 2.6 million clients in Mexico by July 2020.

To accelerate the financial inclusion of marginalized populations, such as women and people in rural areas, the Mexican government launched the 2020–2024 National Financial Inclusion Policy (PNIF). One of the goals of this policy is for 77% of Mexican adults to have “at least one financial product” by 2024 and for more than 90% of Mexican municipalities to have “at least one financial access point” by 2024, the World Bank reported.

By expanding access to microfinance in Mexico, marginalized groups, such as women, can access financial resources to help them rise out of poverty. In turn, this will reduce the gender inequality gap and help expand the Mexican economy through the economic contributions of women in the form of entrepreneurship, increased consumption rates and more.