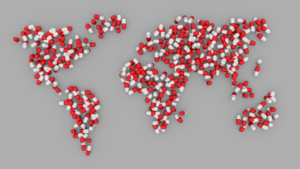 The UN’s 2016 High-Panel report on global access to medicine opens with an inspiring message: “Never in the past has our knowledge of science been so profound and the possibilities to treat all manner of diseases so great.” It is hard to debate that recent advancements in targeted cancer therapy and HIV drug development indicate a bright future for the Rx world. The potential for positive change may go unrealized, however, if access to medicine remains limited. To serve the 3.5 billion people without basic medical services, along with the 100 million who find themselves in extreme poverty because of high medical costs, governments and organizations have to confront the complex economic forces undermining global access to medicine. This article will discuss two such forces and consider how international actors have responded.

Too Big to Heal?

Economic orthodoxy holds that the equilibrium of a product’s supply and demand will determine its price, but medication prices do not adhere to this rule. This is because firms in the pharmaceutical industry possess the key to market distortion. Monopoly power or the ability for firms with outsized market shares to raise prices without experiencing a corresponding drop in sales. Pharmaceutical companies tend to obtain monopoly power for several reasons, such as:

During that period, no lower-priced, generic substitutes can enter the market. Equipped with this uncontested control, these companies can charge high prices for their products, as those who need them will have no other choice but to bear the cost. Yet some, especially individuals in poorer countries dealing with diseases like Hepatitis C and cancer, simply cannot afford these costs.

There are many individuals and corporations who are attempting to solve this problem, however. For example, GlaxoSmithKline (GSK), a pharmaceutical company based in London, England, is trying to put an end to exorbitant prices for prescription drugs in low-income countries. In March 2016, it announced that it would not seek patent protection for its drugs in 50 of the world’s poorest countries. By doing this, the company opened the path for smaller companies to bring lower-priced, generic versions of their drugs to the market. So far, the approach has been effective, earning GSK the top spot in the 2018 Access to Medicine Index. The positive publicity it receives from the ranking will hopefully motivate other companies to follow suit.

While the economics of monopoly power generates the problem of overpricing, the incentives of research and development make it such that many medicines needed in low-income countries go underproduced. As mentioned above, patents spell large rewards, but it costs $800 million on average for a company to obtain one and to bring a drug to the market. This pressures companies to develop the drugs that are most likely to produce a substantial financial return. Additionally, as the UN High-Panel notes in its report, this means that widespread, treatable diseases can oftentimes go unaddressed. For example, antimicrobial-resistant viruses and parasites threaten to kill as many as 10 million people annually by 2050, yet drug companies worldwide have developed virtually no new antibiotics in the past 25 years. In the absence of this innovation, however, public-private R&D partnerships have proven to be a successful substitute. The Global Fund is an example as it has saved 27 million people that malaria, HIV/AIDS and tuberculosis threatened by raising money from both public and private sources and collaborating with domestic task forces and commissions.

Economic barriers to improve global access to medicine remain, but more and more people are starting to conceptualize the problem as an ethical one rather than an economic one. However, ensuring access to health care and maintaining market efficiency are not mutually exclusive. For example, cost-efficient drug production techniques are necessary to disseminate medicines at reduced prices. But other times “policy incoherencies,” as the UN High-Panel report calls them, force decision-makers to choose between the promotion of economic innovation and the provision of public health. Thanks to leading companies like GlaxoSmithKline and compassionate organizations like the Global Fund, the international community is starting to opt for the latter.