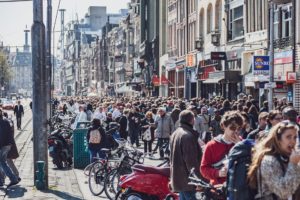 Refugees and immigrants have always been attracted to the country because of its historically high levels of tolerance. The Netherlands is also notorious for being a nation of prosperity, egalitarianism and humanitarian aid. For instance, in World War I, 900,000 Belgians sought refuge in the Netherlands, which was neutral, to escape fighting. During the Holocaust, tens of thousands of people fleeing the Nazis hid in the Netherlands until Axis powers occupied it.  Fast forward to the 21st century, and once again, tens of thousands of people from all over the world are applying for asylum in the Netherlands each year. Although some are moving around within the European Union, many are escaping their war-torn countries of birth. In 1998, this was due to the Yugoslav wars, which kept the number of asylum seekers at high numbers until 2004. In 2015, the Syrian Civil War commenced the flow of a new wave of refugees that are still coming in high numbers today.

The Struggle for Refugee Poverty in the Netherlands

Although the country welcomes these refugees, they do not fare as well economically as their Dutch counterparts. Currently, 79% of Syrian refugees are making less than the low-income threshold, and 95% rely on income support as their main source of income. The nationality of refugees that are best off, Iranians, are still four times as likely to be living in poverty as their Dutch counterparts. In total, 53% of refugee households have a low income.  A cycle has developed because sectors of the Dutch economy, such as agriculture and labor, depend on migrant workers. However, these jobs consistently do not pay well, and few efforts occured to increase their wages. Because refugees typically do not have schooling on par with those from the EU, they have limited job options, and they continue to struggle economically.