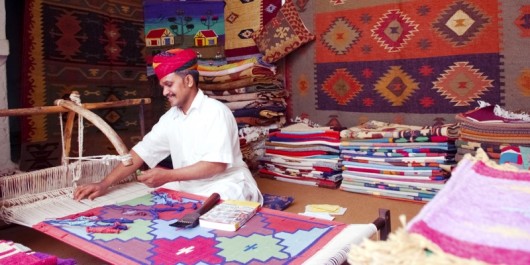 In early August of this year, Indian Prime Minister Modi launched the first National Handloom Day in Chennai, championing traditional textiles as a tool to fight poverty in India.

Last year in October, Modi called upon the film industry to highlight textile products, asking them to include at least one product in their films. According to the government, textile sales rose nearly 60 percent as a result of the added exposure.

The Indian government has also recently announced that it is establishing a policy framework to additionally promote handloom products in the e-marketplace, aiming to popularize the “India Handloom” as a brand.

Handmade textiles are still commonly used for special occasions such as weddings, but Modi says popularizing the textiles as fashion pieces could be a real boost to the Indian economy.

“People wear handloom clothes on social occasions. We need to popularize this among youth. This will give much-needed boost to the handloom sector,” Modi said of the e-commerce avenue.

A number of famous handloom products were born in India, like the Kani shawl of Kashmir and the sarees of Tamil Nadu. According to the prime minister, if the use of handloom products was raised just 5%, turnover would increase by 33%.

In total, the textile industry accounts for 27% of the foreign exchange from exports and makes up three percent of India’s total GDP. The textile sector employs around 35 million people or about 21% of total employment in India. The promotion of high quality, handmade products represents a large, relatively untapped yet significant source of income for the country.

Grassroots efforts have also sprung up to “give handlooms some love.” The hashtag #ILoveHandlooms has been started by GoCoop, India’s first online marketplace for weavers and artisans. The group invites people to share their love for handloom products on social media by posting photos of their favorite items.