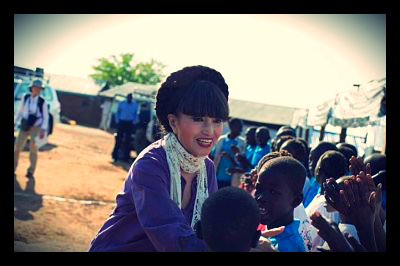 UNICEF Goodwill Ambassador Tetsuko Kuroyunagi helped build a trauma facility in South Sudan seventeen years ago. She recently returned to the center, which has saved the lives of thousands of children in South Sudan. This was the first time she had visited the center.

Tetsuko is a Japanese celebrity. She is an actress, television host, author, and humanitarian. Tetsuko was in Sudan in 1993 during the Sudanese civil war. While she was there, the country was suffering a severe food crisis and many of the nation’s children were suffering as a result of the armed conflict. She was touched by the children’s simple wishes for peace, schools and good teachers.

When Tetsuko left the country and returned to Japan, she called upon the Japanese people to help her raise money to build a trauma care center. She was able to raise and donate $300,000. The facility was founded in 1996 and was named after Tetsuko’s childhood name Tutto-chan.

During Tetsuko’s recent visit, she was able to meet with a now 28-year-old man who was the first child to seek shelter at the center. The man conveyed his story of how the center was an invaluable lifeline for him. He had been a soldier in the Lord’s Resistance Army at age 11 and found the center after he escaped and was brought to Juba, Sudan’s capital.

The man, along with the center’s first director helped other escaped children receive shelter and care, changing the lives of many. The center’s first child was able to eventually escape to Uganda where he pursued his education and made it all the way to university.

The center director, Jim Long, claims the center has helped to save the lives of more than 2,500 children. The children have come from the Central African Republic, the Democratic Republic of the Congo, Uganda, Sudan, and Ethiopia.

The center provides a variety of services to children seeking shelter. They provide interim accommodation and care, family tracing and reunification, psychological support, and welfare support. It is an invaluable regional asset helping children recover from serious trauma.

Tetsuko was incredibly pleased and humbled by the success of the center. She was enthusiastic to return to Japan and tell the Japanese people that the money they sent has been used to save the lives of so many children. She stated that visiting the center and seeing the progress they have made was one of her happiest moments in Sudan.