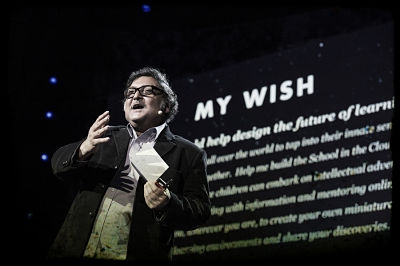 An interesting debate has quietly ignited in the education and technology world, revolving specifically around developing countries. During the TED 2013 Conference, Sugata Mitra, a TED veteran, proposed his ‘wish’ for a School in the Cloud. Based on his ‘minimally invasive education’ (MIE) philosophy, Mitra’s ‘Hole-in-the-Wall’ experiments inspired the project for School in the Cloud. What it involves is bringing together different resources from educators to computers to expand the reach of education to rural areas.

The 22 minutes talk discusses Mitra’s experiment and interaction with children from villages in India and their unexpectedly quick understanding of information such as DNA replication and computer processors all in a language they didn’t understand. Education for Mitra has changed since the Victorian era. Children are not only able to teach themselves but are also able to teach each other without the consistently present teacher. It is through curiosity and encouragement that these children will be able to have access to the same education and thus future that children in developed countries do have, if not more.

Though Sugata Mitra won the 2013 TED Prize, he is not short of criticism. John J. Wood, founder of the organization Room to Read respectfully protested the idea behind School in the Cloud in a recent article for the Huffington Post. While the ‘Hole-in-the-Wall’ experiments have proven certain hypotheses, Wood believes otherwise. “Literacy is a baseline skill that every child needs and if they don’t have that — all the computers and clouds in the world mean nothing to them,” Wood argues.

The solution to educating children in the developing world should rely on, according to Wood, tangible and simple materials such as books. The fact that electricity, let alone internet access and broadband, is a rare and unpredictable commodity in these target areas should be a huge issue. Books don’t require updates or charging; they aren’t susceptible to crashes or even require an advanced understanding of technology. Books and libraries provide the ultimate learning experience that combines knowledge and a sense of community.

With 793 million illiterate people, the world should not focus on one extreme solution or another. Different solutions and pathways will provide equally successful results. For the children in these specific villages in India, learning through collaboration within themselves clearly worked in their favor. Perhaps physical books in a school setting with teachers would have brought them to the same point but the goal was reached and that is what matters.

Both John J. Wood and Sugata Mitra come from a heavy background in education, advocacy, and technology. Their efforts are all backed by statistics and other professional opinions. What could be done from this point on is to understand what areas, ethnicities, communities, age-groups, and other factors work best with which type of solution. Time and energy shouldn’t be wasted on experimenting. They should be spent on maximizing either computers and technology or books and teachers to help educate every child for a more stable and productive future.