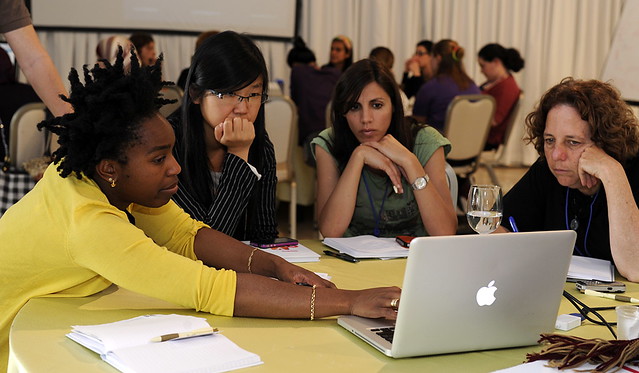 Globally, information and communications technology (ICT) is rapidly becoming more and more important to the economy. However, ICT is leaving women and girls behind. In the world today, there is a gap of 250 million women compared to men using the internet. In developing countries, the gap is even bigger, with a 31 percent difference. There are 200 million fewer women than men in the world who own a mobile phone.

In the corporate world, only 3 of the Fortune 500 tech companies are run by women. These companies are IBM, Xerox and Oracle.  Barriers to the tech field for women include poverty, gender stereotypes and discrimination. It is important that these barriers be eradicated so that women can be included in the increasing digital economy. “Digital skills are indispensable for girls and young women to obtain safe employment in the formal labor market,” said the founder of Women’s Worldwide Web, a charity that provides digital literacy training for women in tech.

In March 2018, GSMA, a company that represents the interests of mobile operators, started a program called Tech4Girls. Part of its programming is educational workshops for girls between the ages of 7-18. So far, it has reached more than 100 girls in North America, Latin America and the Carribean.

These workshops are designed for girls to have hands-on experience with technology, to come away with a sense of knowledge and accomplishment and to developing interpersonal skills. The goal of these workshops is to increase the confidence of girls in their technological abilities so that they may aspire to pursue technological careers.

Another objective of these workshops is to increase interest and involvement from other tech companies to involve girls in technology. They do this by building local and global awareness through “events, SDG tie-in, and external communications.” This is part of the effort to develop relationships with tech companies, groups and schools to create a sort of pipeline for girls in technology.

Implications for the Future

A 2017 study by the Brookings Institute found that since 2002, 517 of 545 occupations have increased their use of digital tools. With the future of the economy going digital, it is important that women have the opportunity to participate in order to prevent the impoverishment of women. According to U.N. Women, an estimated 90 percent of future jobs will require ICT skills. There is currently a shortage of 200 million ICT-skilled people in the job market. There is plenty of room for women in the economy; it’s just a matter of lowering their barriers to entry. An Intel study found that access to the internet for women could “contribute between $13-18 billion to annual GDP across 144 developing countries.” The implications for encouraging women to become more involved in technology go beyond helping women, but also improve the economy.

While there is a shortage of women in tech, companies like GSMA and their Tech4Girls programs are beginning to close the gap. Encouragement and resources for women and girls to gain digital literacy skills are vital in our ever-digitizing world. There is certainly more to be done, but these workshops that build confidence and improve skills are a great way to start.