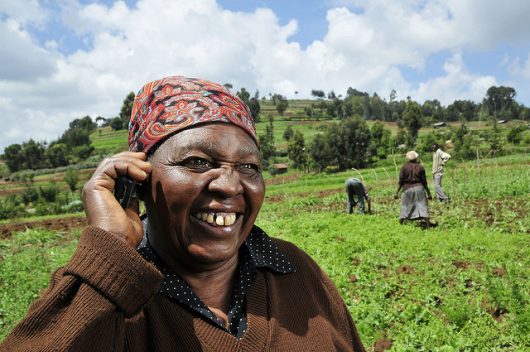 Working in the informal economy does come with certain challenges. Access to communication technology and money transfers is particularly difficult. Additionally, access to loans for ready liquid capital is slim. Most could be addressed with banking infrastructure and all are necessary services that businesses operating in the formal economy enjoy.

However, from the bank’s perspective, it is not in their financial interest to service many in the informal economy. Many unbanked Sub-saharan Africans, nearly 500 million of them, consistently make small transactions—usually less than $5  a day. For this reason and the cost of opening and maintaining banking branches, banks don’t consider these individuals serviceable.

Nomanini, meaning “Anytime” in saSwiti, is just one of several tech companies investing in the African informal economy. With the use of mobile point-of-sale (PoS) devices, individuals can become walking, talking ATMs.

Armed with the PoS device, vendors can sell pre-paid mobile airtime, electricity, facilitate banking transactions, and help others pay their bills. In some cases, clients are even granted micro-loans, allowing them access to working capital and the opportunity to build credit.

With the help of Nomanini’s digital PoS app, the African informal economy is exploding. Some vendors have seen their monthly incomes grow 20-30 percent.

Since launch in 2010, Nomanini has facilitated more than 16 million transactions. With the help of Nomanini, the African informal economy, armed with only smartphones and a wireless connection has shown its viability, It has also proven that its large number of unbanked shouldn’t be ignored by institutions just because of the size of their transactions.