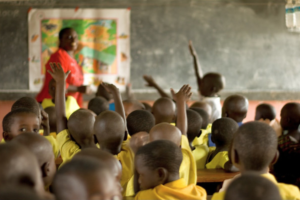 Team Nelson is a nonprofit organization based out of Atlanta, GA that works to send orphans in Tanzania to school. In 2017, there was a 79 percent net enrollment rate in primary school but only a 23 percent net enrollment rate in secondary school. After primary school, many teenagers have to find work to help provide for their families, so retention is a huge issue in secondary school. Many of the orphanages in Arusha, Tanzania lack the funds to send their children to school, so McCrea O’Haire and her board began to raise money to send the first boy she met, Nelson, to school. From there, it grew.

Team Nelson has been successfully raising money and awareness in order to send more Tanzanian orphans to school. The organization also encourages kids to prioritize their education and reap the greater benefits of completing their education instead of leaving to find work. The Borgen Project had the opportunity to interview McCrea O’Haire about Team Nelson about sending orphans to school in Tanzania.

Nelson is one of the first kids that O’Haire met in Tanzania and the inspiration behind Team Nelson. Upon first meeting him, she recalls him having a reserved and shy nature, as he was just trying to blend in with the other children. It was not until she learned of his situation that she saw him for who he really was and “realized how important it is to help the invisible children that people might not notice.” She eventually decided to transform Team Nelson into much more than just one child. Originally, she did not intend to do anything other than sending Nelson to school, but she received an outpour of support from family and friends which snowballed her intentions. Once she felt the support around her, she had the inspiration to do more.

The Future of Team Nelson

In running this nonprofit, O’Haire cites two main challenges. Firstly, everyone in the organization also works full-time jobs and have careers, so there are many difficult compromises that it must make. Secondly, there are always language barriers and cultural differences her team encounters when they visit Arusha. She cites their desire “to help people living across the world while not interrupting their cultural flow or offending anyone,” noting that this is not always easy.

Within the next five years, O’Haire hopes the organization continues its current trajectory. In the past year and a half, it has been able to send 18 children to school, so in five years, it would like to send around 50 or more kids. One of her favorite things about Team Nelson is the “one to one love” that they currently have. She wants to help as many kids as possible but also does not want the program to include thousands of kids that members of the organization have never met.

AIDS killed Nelson’s mother and alcoholism afflicted his father. His family alone represents a larger, systematic issue resulting in the death of many parents and caretakers in Tanzania, which has left about 3.1 million orphans in Tanzania. O’Haire cites this problem as one of the main reasons she and her team decided to create Team Nelson; “A lot of the problems in Tanzania revolve around offering more opportunities for education and helping the children further their lives with increased resources and tools.” She emphasizes the importance of sexual health education that children receive in school and the need for recurring doctor’s appointments.

If the government continues to receive pressure to employ more top-down approaches, she says, there will be drastic improvements in health and education. Fortunately, the Tanzanian government recently decided to make all lower-secondary education free in order to retain more students, as there are currently 1.5 million adolescents that are not in school.

Although it is quite difficult to live in rural Tanzania right now, O’Haire underscores the positivity of everyone she has met there. Prior to her trips there, she prepares herself to be the beacon of hope and energy that they may need but quickly reminds herself that Tanzanians are a happy group. In hard times, she reminds herself of the objectives of Team Nelson, which is sending children to school. She must often turn down requests but notes the importance of staying focused on her organization’s goals and trust in that impact.

If you would like to help Team Nelson and the orphans in Tanzania, O’Haire encourages a monthly donation of just $10, which directly contributes to getting children an education. In the case that providing a financial contribution is not possible, she hopes that “people will spread the word about this cause and really care about the problems our world is facing.”