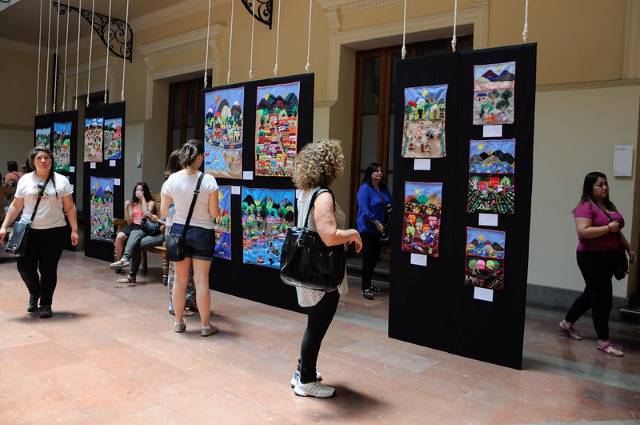 In Chile, from 1973 to 1990, systemic human rights violations swept the nation under General Augusto Pinochet, including acts of physical and sexual abuse as well as psychological damage. Consequently, many progressive young students and men “disappeared” at the hands of the regime because of their ideology. While a grim history, hope can be found in the subsequent actions of women. The Arpilleristas were able to overcome such hardships through tapestry weaving.

Mothers united and responded to the oppression and torture that was inflicted upon their loved ones with methods of protests that defied masculine logic, such as publicly banging pots and pans, singing and dancing to songs with political messages and weaving tapestries. These actions challenged the societal norms in Chile, which were embedded with machismo ideology and male superiority.

Tapestry Weaving as a Form of Resistance

The weaving of tapestries was an especially impactful form of resistance that was founded in 1975. Once unified, the Arpilleristas began to construct patchwork tapestries, or arpilleras, that depicted scenes of hardship and violence that people experienced under Pinochet.

The hand-made arpilleras portrayed shantytown community kitchens, which were often families’ only means of feeding themselves, women’s laundry and bread-baking subsistence-level cooperatives, arrests and soldiers beating protesters. It was through the crafting of the arpilleras that women were granted a voice to tell their individual and collective stories.

However, the crafting of the arpilleras was more than just an act of protest and storytelling, it was also a way to generate income. The women weaving arpilleras was a form of advocacy and also a livelihood. The Arpilleristas transformed conventional visions of secluded motherhood and domesticity, all the while eliminating submissive and passive associations regarding women.

With the return of democracy in the 1990s, the oppression f the Pinochet dictatorship has since been eradicated. All individuals are able to enjoy democracy. The women, “do so now, however, with a different consciousness. Women have not forgotten the empowerment they gained when they learned they could change things by taking to the streets and protesting the dictatorship.”

It is this confidence that continues to inspire women as they face problems in Chile, however, they do so in a different manner now.

A Return to Democracy

It was only through the opression of the dictatorship and conservative gender ideology promoted by the dictatorship, Chilean women mobilized as feminists to demand a return to democracy. Though they were not self-identified feminists, the collective act of women uniting in order to defeat oppression has altered and expanded women’s rights in Chile today and recharacterized the very definition of motherhood.

The Arpilleristas’ tapestry weaving has served as an inspiring example of fighting against injustice while empowering women through economic development. By employing an accepted tradition of weaving, the women were able to capitalize and in many cases negate extreme poverty and additional hardships.