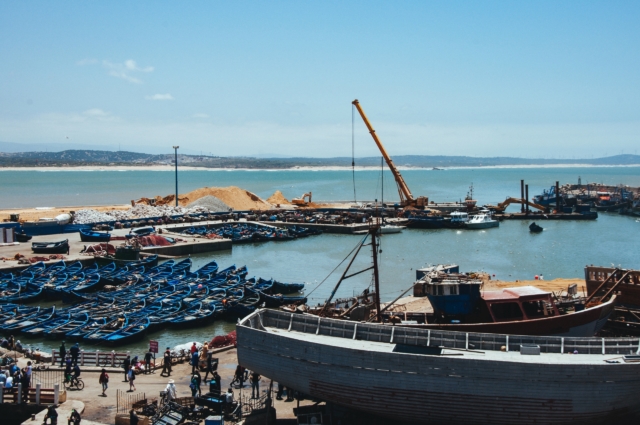 Morocco’s geographic location gives it an advantage when it comes to developing the country’s economy. Morocco borders the Mediterranean Sea to the north and the Atlantic Ocean to the west, making it the closest African country to Europe. Mega ports in Morocco are among the many infrastructure developments that are revolutionizing the country as Morocco proceeds to build and expand its transportation infrastructure to connect the two continents.

The Tanger Med port adopted its name from the port’s home city of Tangier in northwestern Morocco. Because of its important geographic location, Tangier has played a significant role in trade between Africa and Europe since ancient times.

The first site, known as Tanger Med 1, has two terminals. The first terminal started in 2007 after the King of Morocco, King Mohammed VI, laid the first stone in 2002. Following that, the second terminal started just one year later. Tanger Med 1 has a capacity of 3.5 million 20-foot equivalent units (TEUs). The terminals created 6,000 jobs at the port and an additional 70,000 jobs in the trade zone area.

After the establishment of Tanger Med 1, the King gave the order for a second container port, Tanger Med 2, with an investment of $1.5 billion. The port contained two more terminals, beginning construction officially in 2015. In the summer of 2019, Tanger Med 2 formally opened. Tanger Med became the largest port in the Mediterranean region, exceeding Valencia and Algeciras’ container ports with six million TEUs. Because of the outstanding performance of Tanger Med, the first of the mega ports in Morocco and the biggest in Africa, the government decided to build similar mega ports in other cities.

Nador West Med is the second of the mega ports in Morocco. With almost half of its construction complete, the port will be fully ready by the end of 2022. The project will cost $13.8 million, consisting of new infrastructure and an industrial port.

The first phase of the Nador West port will include a 1,520-meter container dock for larger ships. It will also include a 600-meter dock for general goods to serve larger merchant ships. Furthermore, the Nador West Med port will have oil and chemical tankers, each able to carry approximately 170,000 tons.

New road construction will expand the route from six meters to nine meters and fortify the pavement. Nador West Med will have a tremendous socio-economic impact on the region. Once the port opens, it will reduce the unemployment rate with more jobs, allow for easy entry to the region and provide tax benefits for the country.

Another port, the Dakhla Atlantic Port, will be built in Dakhla, located in a long, narrow peninsula in the southwest of Morocco. In 2020, the King announced significant investments that will cover the southern region of Morocco, including a mega port in Dakhla. This port will enhance many sectors such as fisheries, mining, energy, tourism and agriculture, processing approximately 2.2 million tons of goods yearly. With a cost of roughly $1.1 billion, the port will elevate direct commerce between Africa, Europe and the Americas following its completion in 2026. It will also include a space of 1,650 hectares for industrial and logistical services.

Certainly, mega ports in Morocco are boosting the country’s economy with a powerful presence in the region. Due to its strategic geographic location, Morocco’s ports allow the establishment of more investments and create a significant number of jobs. Moving forward, these mega ports should continue to bring many benefits for the country and the region.