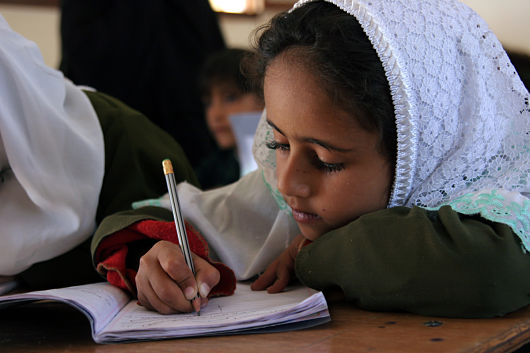 It is inarguable that education lies at the heart of a better, safer society. Equal educational opportunity for both men and women is central to the goals of gender equality. UNESCO sums up the significance of education for human rights, and vice versa, as follows: “Education is a fundamental human right and is essential for the exercise of all other human rights.”

An educated society is less likely to be susceptible to fundamentalist ideas or take part in radical activities. The employment opportunities that follow a sound education can lead to economic stability, which can make the terrorist groups’ financial incentive for their members a lot less lucrative. In essence, education is the primary tool through which people can be empowered against violations of their rights.

The issue in Afghanistan is that despite waning public support for the Taliban, the militants continue to gather supporters. Their support base is strongest in the provinces of Kandahar and Helmand, where the human rights and gender equality situation is the most abysmal. This signifies a vicious cycle of oppression feeding into militancy, which in turn backs the gross violations of fundamental human rights.

The Taliban movement originates from the post-Soviet invasion of fundamentalist Madrassahs recruiting mostly young Afghan refugees, who had been left in immense poverty because of tyrannical feudal rulers in Afghanistan. These recruits in turn mature into Talibans to brutally suppress marginalized groups, including ethnic and religious minorities and women. The continued violation of basic human rights, including education, ensures the continued prevalence of poverty and oppression.

The strategy that the United States needs to implement in Afghanistan has to be one that can eradicate this continued cycle of violence.

In a dangerously poor country such as Afghanistan, excluding one half of its population from education—and therefore employment—is perilous for the entire nation. Currently, the literacy rate for women is only around 32%.

Various studies have shown low literacy rates in women to be the root cause of many detrimental effects on society. Uneducated mothers are unable to raise their children to be law-abiding citizens of the country. Illiterate women are unlikely to speak out for their civil rights. Denial of education for women leads them to be completely dependent on men, placing them in an exploitable position.

In the last decade, the goal of the international community in Afghanistan has evolved to center around establishing human rights and gender equality through the promotion of education. Currently, the emphasis of the U.S. government has been on providing resources to the Afghan education system. Since 2001, the United States has spent a whopping $1.1 billion on promoting education in Afghanistan.

One of the main goals of USAID has been to promote female education, which has been arguably successful. But experts, including UNICEF, fear that the slow progress made in 14 years of U.S. involvement is likely to be reversed in the event of U.S. withdrawal.

To implement a better system of education where female students are equivalently enrolled as their male counterparts, there needs to be a multifaceted effort. The curriculum should be streamlined, government-regulated and specifically designed for each province and should not attempt to hastily push secular agendas. The United States needs to push for such a pluralistic approach by the Afghan government to ensure the access of education for women.

This strategy would also mark a compromise between funding foreign-run schools, which are always a target for militants, and handing over millions of dollars in aid to corrupt ministries.

Instead, the United States should implement a closely-regulated policy of providing financial assistance to local education authorities. This would result in greater accountability as well as better efficiency for the school boards.

Empowering local authorities would also make it more acceptable for girls to get an education, as local, better-known authorities are less likely to be regarded as a part of Western “propaganda.” This will also create employment opportunities at the local level, which can be yet another factor to positively shape local opinion on internationally-funded education.