Tag Archive for: System Enhancement for Health Action in Transition 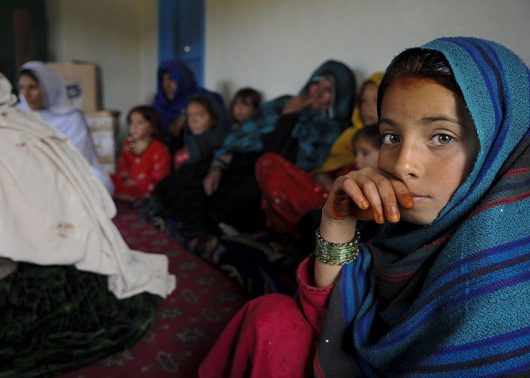 Afghanistan is one of the most dangerous countries in the world to be a woman. For decades, women in Afghanistan have endured overwhelming marginalization, discrimination and highly restricted access to education, healthcare and employment. Since the 1996 rise of the Taliban, a Sunni Islamic fundamentalist group, women and girls’ human rights have been severely violated.

Before the Taliban’s rise to power, women’s rights were gradually improving, despite high maternal and child mortality rates and a very low literacy rate for women. Before the 1996 takeover, Afghan women helped draft the 1964 Constitution, there were at least three women legislators in Parliament by the 1970s and a 1978 decree required education for girls. But as the Taliban insurgents gained control, those rights deteriorated and the nationalist group centered its campaign on terrorizing women.

During the Taliban’s rule, women and girls were forced into marriage and slavery, they had to be accompanied by a male relative in order to leave the house, they were banned from driving and only about three percent of girls received some sort of primary education. Additionally, the Taliban implemented heavy restrictions on access to health services for Afghan women, including a ban on receiving care from male health workers, which left many pregnant women without the aid of skilled doctors, nurses or midwives.

After five years of brutally sexist and misogynistic authority, the Taliban government was defeated in 2001 by U.S. and Northern Alliance forces. However, internal conflict and fighting between the Afghan government and Taliban forces is still a crisis as of today; thousands of civilian fatalities were reported in 2017. Once the Taliban fell from power in 2001, hope sparked for improved economic and social conditions, leading to a positive reemergence of women’s rights.

But, despite government attempts to devise and institute plans to empower Afghan women, inclusion for the women of Afghanistan still remains a challenge. According to a 2017 report, women and girls have continued to endure gender-based violence by state and non-state actors, there has been an increase in public punishments of women by armed groups and restricted access to girls’ education by armed groups has persisted.

However, women are striving to regain their role in society and present living conditions are gradually progressing. For example, as of recently, access to health services for Afghan women has increased. These improved services include a newly established health center and an increase in hiring female health workers in Daman district.

Daman district, located in central Kandahar Province, is known for having a lack of health facilities and female health professionals, which has led to increased maternal and infant mortality rates. Afghanistan as a whole has some of the highest infant and maternal mortality rates in the world, and pregnancy-related causes have taken the lives of thousands of Afghan women each year, although most of the causes are easily preventable.

However, since the establishment of the Azam Qala Basic Health Center in 2015, those rates have slightly decreased. Kandahar Province’s new health center is seeing more female patients and healthy deliveries, and as of March 29, 2018, there now are at least 20 childbirths at the center each month. Overall, the Azam Qala Health Center sees more than 70 patients a day and serves more than 13,000 people in the Daman district.

With great support from the System Enhancement for Health Action in Transition Program (SEHAT), the Azam Qala Basic Health Center was financed and provided with skillful female health professionals, and now access to health services for Afghan women is much improved. SEHAT’s objective is to expand the scope, quality and coverage of health services to Afghanistan, particularly for the most vulnerable. With continued efforts, women and girls’ rights in Afghanistan will continue to improve.