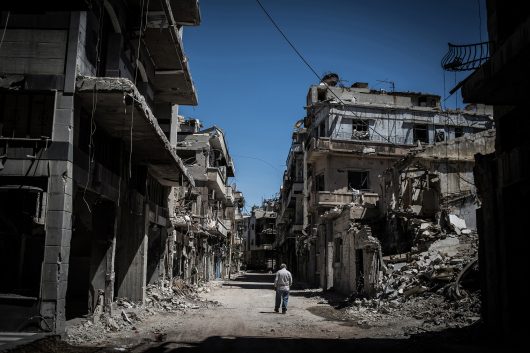 Between rubble, blood and chaos, emerge a group of voluntarily civil servants. They are known as Syria’s White Helmets, a civil servant group made of local volunteers that act as the first responders to hundreds of daily airstrikes and bombings in Syria. They dig for survivors between fallen concrete walls and twisted metal.

The team grew out of small, untrained units to become a force of search and rescue missions. They have saved the lives of 60,000 since 2014. They are called White Helmets for the color of the hard hats they wear. But, these are just some 3,000 ordinary men who are pushed by their desire to save lives. They are trained in Turkey and they have been successful in their mission which brought the Syrian regime to fury.

Syria’s White Helmets are officially known as Syria Civil Defense and ars now established on a ground community that is widely recognized and appraised. Their only goal is to save lives and not to get involved in politics. Despite that, the group was criticized by the regime for getting millions in funds from western governments. Their work, however, is purely humanitarian.

Syria’s White Helmets depends mainly on local capabilities. The leader, Raed al-Saleh, said at the U.N. headquarters “We are abandoned.” The group of volunteers decided not to escape the war and not to hold a gun but to wear helmets, pull people out of the wreckage and extinguish a fire. Their heroism was demonstrated in a Netflix documentary told by three White Helmets.

This dedication and courage inspired the global community and Syria’s White Helmets have been nominated for the Nobel Peace Prize. Under the motto of “to save one life, is to save all of humanity,” these volunteers risk everything trying to demonstrate humanity.

It is indeed a story of heroism from the darkest corners of humanity. This unlikely humanitarian act is a symbol of hope for millions of Syrians. Khaled Farah, one of Syria’s White Helmets, said: “We go to save as many people as we can. If one person was alive that’s enough for us to take the risk.”