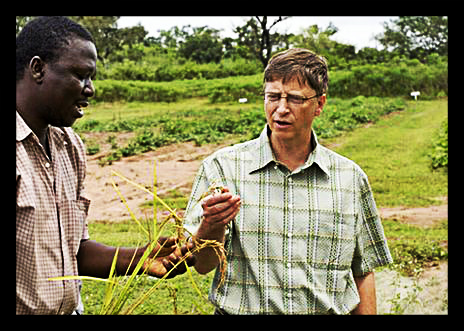 In an interview with CBS’ Charlie Rose, Microsoft co-founder Bill Gates discussed the importance of innovation in agriculture. At first, Rose and Gates discussed Gates’ annual letter, including a call to the United States and other developed countries to further agricultural research. However, the conversation took an unexpected turn to a related topic that Gates finds fascinating: fertilizer.

Developing nations continue to face food shortages due to many causes, including climate change. Demand for food is constantly rising and the price of food is increasing as a result. Gates believes that the problems surrounding food-production goals can be alleviated if more investment is made in agricultural research, which includes research in fertilizer.

Fertilizers improve the growth of plants, and are made up of substances consisting of chemical elements such as manure. Fertilizers provide crops with the essential nutrients they need to fight off pests, disease, and the elements. However, insects and disease are only one issue that affects crops. Another major concern for crop sustainability is soil condition, which is drastically affected by changing weather. Fertilizers enhance the soil by allowing the soil to hold more water and nutrients, where forces like rain and wind would usually create unstable soil not suitable for sustained growth.

It appears that Gates’ fascination with fertilizer has developed since his interview with Charlie Rose. On November 12, 2013, Gates wrote an essay that appeared on wired.com saying, “I am a little obsessed with fertilizer. I mean I’m fascinated with its role, not with using it.” Fertilizer plays an important role in the lives of people all over the world. Specifically, 40% of the world benefits from crop output that fertilizer has made possible. Gates compares the innovative development of fertilizer to the creation of synthetic ammonia and polio vaccines.

One of the ways that the Bill & Melinda Gates Foundation has advanced research in fertilizer is through supporting a joint project by the Swiss Aquatic Research Institute and the South African Water Utility. The project involves developing urine from conventional sewer-based sanitation and central wastewater treatment systems as a commercial fertilizer and is set to be complete by 2014.