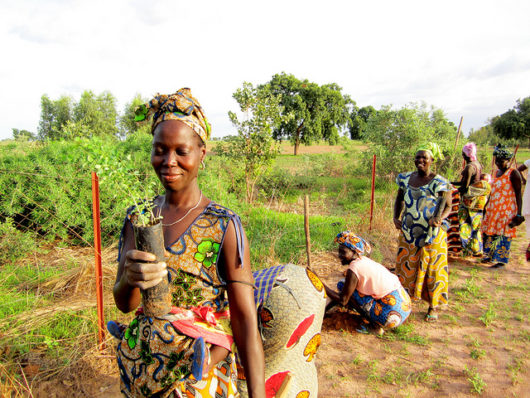 The story of sustainable agriculture in Senegal is one of success that should be used as a guide for other countries. Between 1960 and the early 1980s, Senegal used monocropping, a dangerous practice where only one crop is grown year after year, leaching more and more nutrients from the ground. This eventually left the soil void of essential nutrients. When the area was hit by drought in the early 1980s, the land was unable to cope, and the country suffered from food shortages. However, over the last 20 years, Senegal has been using sustainable agriculture to bring back fertility to the soil.

In 1989, the United States government began working with Rodale International to come up with a plan to restore the soil. The plan was to use crop rotation. Every three years, one of four different plants would be sown in the soil. Each plant would only take certain nutrients from the ground and replace others. One of these plants was peanuts, the plant that caused the problem in the first place, and the second was millet. Both are now the main agricultural exports of Senegal. The other two crops in rotation are cowpeas and cassava.

The United States and international companies are not the only organizations helping improve sustainable agriculture in Senegal. Senegal has been part of the Food and Agriculture Organization of the United Nations (FAO) IPPM program since 2001. The IPPM (Integrated Production and Pest Management Program) is dedicated to responsible pest control practices. The program touches on many points to control pests; however, its most important lesson is the responsible use of pesticides.

Pesticides remain a continuous problem in Senegal and most of the world due to their overuse. Pesticides stay in the water table, contaminating drinking water. They also hurt the soil since the chemicals build up over time and stay on the crops. When consumed pesticides are harmful to humans and animals. This is not to say that they are not sometimes necessary, but the IPPM suggests a less-is-more approach.

Private foundations are also doing their part. Syngenta, a Swiss-based based agricultural firm, has a foundation called the Syngenta Foundation for Sustainable Agriculture. The foundation works with public and private sector partners in order to finance innovations in sustainable agriculture. They also work with the World Bank, USAID and both the Swiss and Australian governments.

Since 2014, Syngenta has been promoting sustainable agriculture in Senegal’s rice production. In 2015, the organization began helping farmers gain access to better-mechanized equipment to facilitate rice cultivation in the Senegal River Valley. The overall approach of the Syngenta Foundation for Sustainable Agriculture is to work with the entire system. The work with NGO’s and governments to help small farmers become more productive has helped to increase the economic benefit of sustainable farming practices. It also helps the farmers better feed themselves and their families.

Improving the Economy Through Sustainable Agriculture

The soil is becoming productive again, and farmers are gaining access to better techniques and equipment. However, the fight is not over. Senegal suffers from an unemployment rate of 47 percent. In 2017, the agricultural industry employed 77 percent of the population in Senegal, an estimated 6.9 million people. However, the agriculture industry only makes up only about 17 percent of the of the country’s GDP. The next step to better economic stability will be to tackle these issues. Hopefully, like its soil, the Senegalese economy will now rejuvenate and grow for all.