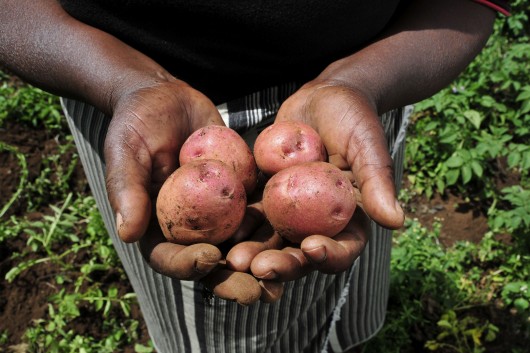 In Africa, sweet potatoes are proving to be invaluable in the fight against malnutrition. According to a publication by HarvestPlus, the Vitamin A rich Orange Fleshed Sweet Potato (OFSP) was introduced in 2007 to 24,000 farming families in Mozambique and Uganda. The program was presented by HarvestPlus and its partners, specifically targeting women and children who suffer most from vitamin A deficiency.

African farmers are no strangers to sweet potatoes, but they have always grown the paler varieties: yellow and white, which lack beta carotene and other nutrients, while the OFSP does not. The OFSP is a crop that has gone under biofortification.

According to a HarvestPlus research brief, “Biofortification is the process of breeding staple food crops that have a higher micronutrient content.” This process can be carried out conventionally or through genetic engineering. “All crops being released by HarvestPlus and collaborators are conventionally bred.” The seeds and vines of the OFSP can be shared.

Since the sweet potato was already a staple in the diet of Africans, introducing the OFSP was a deliberate strategy to cater to the existing market. In Mozambique and Uganda, the effort succeeded in raising Vitamin A levels by an appreciable margin in women and children.

The sweet potato requires less work than the other staple crops of cassava, wheat and rice, according to the International Potato Center (CIP). It tolerates poor growing conditions better than the other crops and produces better yields with more edible energy per hectare. The sweet potato has previously been grown in small plots but the CIP sees this changing as the OFSP grows in popularity and importance.

USAID, with the support of Feed the Future has introduced the OFSP into Ghana. They hope to eventually reach 300,000 households with women of reproductive age and children under the age of five.

Feed the Future works directly with the government of Ghana to target the poorest households to give them access to the Orange Fleshed Sweet Potato. Feed the Future wrote a Multi-Year Strategy for Ghana (2011-15) to outline its goals, including improved nutrition, especially of women and children, and improved agricultural production in Northern Ghana, especially for small farm holders.