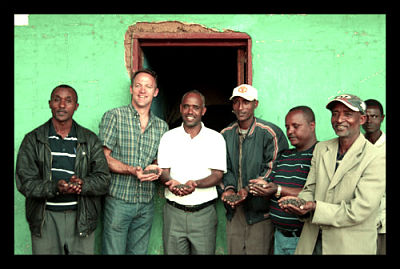 Many of the world’s primary coffee-producing regions are also amongst the world’s poorest and issues such as poor infrastructure, lack of transportation, and  unavailability of markets only exacerbate the problem. But with the global market for coffee as strong as it is, and demand only increasing, the producers should not be left behind. Fair Trade has been a successful initiative over the last few years, but is not the only way for growers to ensure competitive pricing and a fair share.

The Duromina – meaning ‘improve their lives’ in the local Oromo language – cooperative in the Jimma region of Ethiopia hopes to improve conditions for producers and producing regions. Duromina was initiated by 113 local farmers in response to poor market rates for their product. The local coffee bean was previously known as Jimma 5, referring to the five major defects that can mar a coffee bean: overripe, underripe, cracked, insect damaged, and fermented. However, these defects were caused by farming and transportation issues, and not the quality of the beans themselves. And with no suitable infrastructure in place, farmers would be cut off from markets when the river swelled. Transportation issues would also mean buyers could lower prices and farmers would have to accept them.

And so, with a loan secured through non-profit organization TechnoServe in 2010, the Duromina coffee cooperative was able to install a wet mill to process fully washed coffee. This meant they no longer required transportation to reach a mill or were forced to sell unprocessed beans for a lower price. As a result of this improvement in quality, the farmers of the Duromina cooperative secured a contract with buyer’s from Sweet Maria’s and Stumptown. Last year Duromina sold 71 metric tons to four international roasters, all through direct trade links.

By taking the initiative for improvement upon themselves, and with the aid of a non-profit like TechnoServe, this community has been able to vastly improve their quality of life. The coffee produced has gone from being known for its poor quality to being voted the ‘Best in Africa’ by a panel of international judges. In addition to these accolades, the income and outlook for these farmers has been vastly improved. Using money generated through the cooperative, a bridge has been built over the nearby river and roads and infrastructure vastly improved. The community will soon be connected to the power grid for the first time, and the primary school has been expanded through grade 8. Further to this, some families have even been able to send their children on to secondary school in a nearby town.

Having a product to sell is the first step. But enabling producers to reach international markets is a much more difficult second step. With initial assistance from TechnoServe, and willing buyers in Stumptown and Sweet Maria’s, the Duromina Cooperative reveals the potential for improved farmer conditions in coffee-producing regions.