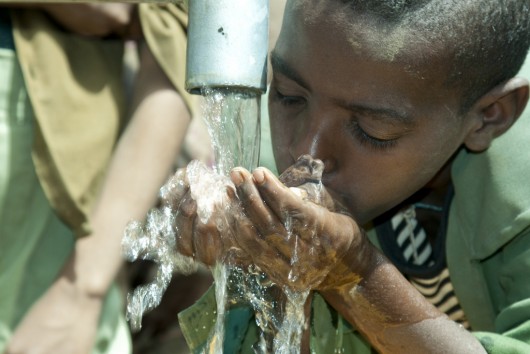 In South Africa, one company is tapping into an alternative yet ubiquitous source for drinking water—the air.

Water From Air is pioneering technology for use in domestic settings that allows clean, drinkable water to be harvested from the humidity in the air.

Even though the technology used in Water From Air’s machines is not new, the company’s CEO Ray de Vries told news24 that his company is the first to make home units available.

The machines operate according to the humidity in the air, drawing it in and cooling it to allow condensation to form in a collecting tank. The collected water is then disinfected with ultraviolet light and filtered to remove further impurities.

Since the water is drawn from the air rather than the ground, it is already cleaner and excludes contaminants more commonly found in terrestrial sources. The result is “100 percent pure and clean” water, according to de Vries.

The company manufactures different sized machines powered through solar, diesel or gas. The most popular machine is the AW3 model designed for domestic use in households and clinics. Depending on the humidity of the surrounding air, the AW3 model is capable of capturing 32 liters of water per day.

Models designed for larger scale use are estimated to be capable of producing up to 1,500 liters of water per day. The company estimates that in cities such as Cape Town where humidity averages approximately 75 percent, the device might be able to provide an average of between 25 and 28 liters of water every day.

Water From Air has sold upwards of 400 units since its debut earlier this year. As severe drought conditions persist in South Africa, the company is trying to keep pace with the growing demand for its units.

The main idea behind marketing the devices is to provide households in drier regions with a more secure supply of water, especially in times of water shortage or drought. The Water From Air devices enable users to directly harvest water from the surrounding air instead of transporting the precious resource from other areas of the country.

Unlike more expensive alternatives such as desalination, Water From Air also offers a cost-effective and novel approach geared towards sustainability.