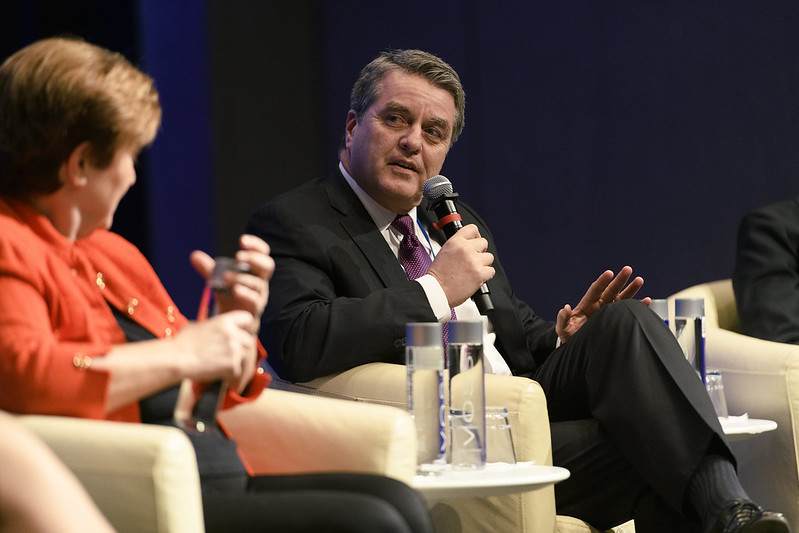 The World Trade Organization (WTO) is one of the youngest, international economic organizations in the world. However, it plays an important role in the international economy and the global fight against poverty. Originating from the Uruguay Round negotiations which took place from 1986 to 1994, the WTO took over the functions of the General Agreement on Tariffs and Trade (GATT) in 1995. Since then, it has been the setting for global trade negotiations. The main role of the WTO is to assess trade barriers between countries and solve them through diplomatic negotiation. The goal of the WTO is to achieve full, fair trade and a fully globalized economy. In doing so, the WTO fights poverty around the world.

As global trade profits continue to rise, the need for a powerful and well-directed WTO is strong. According to the WTO, merchandise exports have increased by an average of 6% every year since the 1950s. Furthermore, global trade has grown 50% more than the global economy outputs every year and “total exports in 2016 were 250 times the level of 1948.” Global poverty reduction and global trade can play hand-in-hand. The WTO ensures that the two are harmonious as possible. By focusing on developing countries, protecting the most vulnerable populations and giving less powerful countries voices on the international stage, the WTO fights poverty in unique and effective ways.

One way in which the WTO fights poverty is through global development. Also, the inclusion of low income in the global trade market. The WTO has a powerful commitment to assist developing countries in maximizing their trade potential. This, in an effort to achieve stable footing on the world stage. The WTO allows developing countries more time to meet certain commitments. Moreover, it plays an active role in building trade infrastructure across the developing world. One of the WTO’s most powerful policies is the Aid for Trade initiative launched in 2005. The initiative works to build developing countries’ trade capacity through investments in infrastructure. More than $340 billion supports growing economies through this initiative.

Another key WTO program fighting poverty is the Enhanced Integrated Framework (EIF). The mission of the program is to assist developing nations “in their use of trade as an engine for growth, sustainable development, and poverty reduction.” EIF has worked in 51 countries, ensuring country ownership of trading ports. Moreover, EIF acts as an “honest broker” in trade negotiations and helps countries fight poverty by creating new trade-related jobs. EIF has invested more than $220 million into supporting the world’s poorest countries, through trade.

The WTO is also working to ensure that developing countries interested in entering into global trade can meet “international standards for food safety, plant and animal health”. This way, they can effectively access global markets. The program is called the Standards and Trade Development Facility (STDF) and it works to ensure that developing economies are prepared for the demands and standards of the global economy.

The statistics speak for themselves as to how the WTO fights poverty. According to the World Bank, developing countries make nearly 50% of all global trade, an increase “from 33% in 2000.” Coinciding with the increase in developing countries’ role in global trade is a sharp decline in global poverty. Nearly 1 billion people have risen out of extreme poverty since 1990, underscoring the clear linkage between increased trade capacity and poverty reduction. The WTO is ensuring that citizens of all nations can participate in and benefit from global trade by providing a new road, source of employment or new exported goods.

The WTO indirectly affects poverty by facilitating the growth in trade that has brought about significant decreases in poverty. Increased trade brings employment and infrastructure to communities that never would have seen them without their nations’ entry into the global economy. Through its programs, the WTO affects poverty on a large scale by ensuring that the global trade market is just that, truly global.