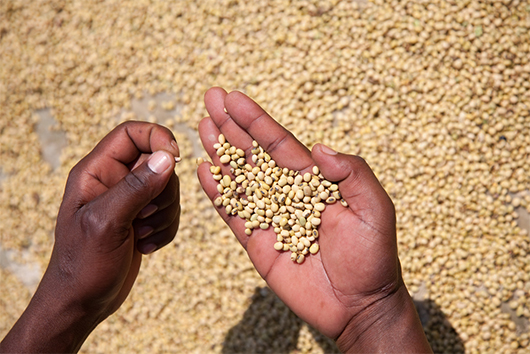 Malnutrition, an ugly consequence of poverty. runs rampant in developing countries. In Afghanistan, the World Food Programme (WFP) is introducing a source of protein less known there. Soya could help stop hunger in one of the poorest countries in the world.

Malnutrition is defined as the lack of proper nutrition, caused by not having enough to eat, not eating enough of the right things or being unable to use the food that one does eat. Malnutrition is commonly due to the absence of quality food available to eat and is often related to high food prices and poverty. A lack of breastfeeding may contribute, as may a number of infectious diseases such as gastroenteritis, pneumonia, malaria and measles, which increase nutrient requirements.

Soya has been widely used in China for centuries and was even considered one of the five holy crops along with rice, wheat, barley and millet. Soya is very versatile in diets and very healthy, with a high level of complete protein, which means that they contain significant amounts of all nine essential amino acids.

The U.S. Food and Drug Administration (FDA) has confirmed that foods containing soy protein may also reduce the risk of coronary heart disease.

Soya is fairly inexpensive. It’s much cheaper than meat or other protein-rich vegetables, making it a perfect fit to deliver a protein punch to a poverty-stricken nation such as Afghanistan.

Soya, with all its health benefits, was virtually non-existent in Afghanistan and very few people knew of its value. The WFP saw soya as a possible answer to the malnutrition poisoning the country and began establishing it in 2014.

According to the WFP, more than 8,000 Afghan farmers were trained in how to grow the protein-rich bean, with over 84 metric tons of seed handed out to farmers. Six factories have now been established in different parts of the country, and several types of soya products are now available in the Afghan markets. The WFP in partnership with Nutrition Education International is teaching communities in Afghanistan to familiarize themselves with soya and several public awareness workshops have been established and are being attended by thousands of people.

Afghanistan is unquestionably one of the most poverty-stricken countries in the world, and malnutrition is a genuine danger affecting the lives of its people. Efforts by the WFP and the introduction of soya with its nutritional benefits could certainly be instrumental in relief for a population plagued by years of war and poverty.