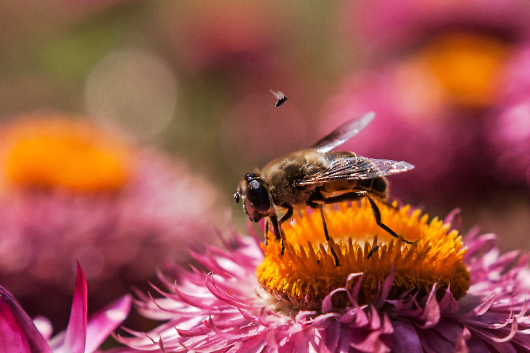 This week, President Obama revealed a solution to a problem not many Americans knew existed: declining bee populations.

The plan, appropriately titled the “National Strategy to Promote the Health of Honey Bees and Other Pollinators,” was drafted by the Pollinator Health Task Force and runs for a solid 58 pages. It’s the sort of thing that prompts endless jokes and puns (“Plan B” is a popular one), but for farmers around the world, the decline in bees is serious business.

That’s because bees play an important role in our ecosystem. As pollinators, bees help plants reproduce by spreading pollen around, enabling the creation of seeds and fruit. Many crops rely on bee pollination, including coffee and apples. Larger farms rely on beekeepers who drive from farm to farm, leasing their bees for short bouts of pollination. All in all, 30 percent of the world’s crops rely on insect pollination, most often from bees.

If these pollinators were to suddenly disappear, the world would be in a lot of trouble. Yet that is exactly what is happening, in a mysterious phenomenon known to scientists as “colony collapse disorder.” Worker bees are vanishing and their hives are slowly dying off.

That’s leaving some farmers in the developing world scrambling to find new ways of pollinating their crops. In southeast China, for instance, bee populations have been diminished by habitat destruction and heavy doses of pesticides. Apple farmers in the region are now forced to pollinate their crops by hand. Armed with utensils resembling feather dusters, the workers climb along branches and pollinate the trees themselves.

It’s a painstaking and process that leaves Tang Ya, a researcher at Sichuan University, concerned about sustainability. “For fruit growers, artificial pollination can guarantee profits,” the scientist told China Daily. “But as more young people leave their homes to seek jobs in cities, I’m afraid that artificial pollination will be very difficult to achieve in less than two decades.”

But the problem goes beyond economics; it threatens to worsen global malnutrition as well.

A study published this year by Harvard University and the University of Vermont demonstrated how declining pollinator populations would disrupt human diets in the developing world. Vitamin A, for instance, comes from crops which mostly rely on insect pollinators. According to the World Health Organization, Vitamin A deficiency can have devastating consequences for children, including blindness and a much higher risk of illness and death from common childhood infections.

Though aware of the dangers involved, scientists aren’t entirely sure what causes colony collapse disorder. A wide range of explanations have been offered, including pesticide use, climate change, malnutrition and disease. Neonicotinoid, a type of pesticide, has attracted scrutiny recently and European countries have placed restrictions on its further use.

In the United States, President Obama’s plan calls for setting aside land for pollinators, further restricting pesticide use and increasing funding for research. How the developing world will cope, however, is less clear.