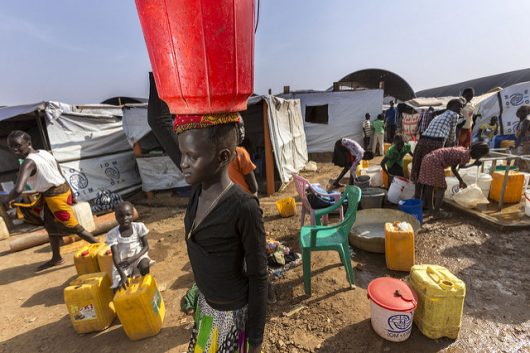 Founded in 2011, the young nation of South Sudan has been fraught with civil war for the past few years, resulting from the conflict between President Kiir and his former Vice President Machar. More than just a political struggle, the rift between Kiir and Machar is connected to ethnic tensions between the Dinka people and the Nuer people; Kiir belongs to the Dinka, and Machar to the Nuer. Ethnic tensions have long existed in the region, but the conflict between the two political officials has ignited these tensions, creating civil war.

The violence created by these warring political leaders has forced civilians to flee the country to escape the bloodshed, resulting in the South Sudan refugee crisis. The number of refugees continues to skyrocket, with over two million refugees reported in 2017. The majority of these refugees are children, many of whom are malnourished and suffering physical and emotional trauma.

Many of these refugees have come to bordering Uganda, itself the site of recent conflict as Joseph Kony used guerilla warfare and child soldiers against the Ugandan government throughout the 1990’s. Former refugees of Uganda often found themselves in the region that is currently South Sudan.

Having driven Kony out of the country, Uganda not only welcomes the return of its people but is known for its welcoming refugee policy. The country has become a haven for victims of the South Sudan refugee crisis, hosting around a million refugees.

However, Uganda’s friendly refugee policy—which allows refugees the chance to own land and travel freely about the country—is taking a toll. As Uganda hosts more and more refugees, it faces overcrowding and an inability to quickly meet the demands of all the new people. The country’s refugee camp Bidi Bidi, home to over 270,000 people, is the largest refugee camp in the world. To avoid too much congestion at Bidi Bidi, other refugee camps are opening around the country, but the process of being welcomed in Uganda may take several days. This raises the question of Uganda’s limit as the civil war continues in its northern neighbor, South Sudan.

There is hope, however, for the victims of the South Sudan refugee crisis. As numbers increase in the refugee camps in Uganda and its eastern neighbor, Kenya, the EU has announced a €34 million aid package to help alleviate the burden of hosting the refugees. The majority of the money, following the majority of the refugees, will be headed to Uganda. The aid is meant to help the influx of new refugees from South Sudan, as well as incoming refugees from the Democratic Republic of the Congo. The EU’s assistance will also provide clean water, food and education for the large child population among the refugees.

Whether or not the large influx of refugees in Uganda will continue remains to be seen. On June 27, Kiir and Machar, the leaders of the civil war in South Sudan, agreed to a “permanent” cease-fire under the threat of U.N. sanctions and an arms embargo. If the cease-fire is not violated, the priority of the international community, as well as the South Sudanese government and the warring factions, will be to address the humanitarian crisis and provide aid for the displaced and starving civilians.

With an air of tepid optimism, the EU has also announced €45 million in aid for South Sudan to help the displaced people. This aid is designed to provide food, water and shelter for refugees, and to protect young women from gender-based violence. Should the cease-fire last, refugees will be allowed to return home after five years of conflict and violence, ending the strain on Uganda’s resources. Even if the cease-fire is broken, this moment of peace provides humanitarian aid workers a brief period to focus on civilians and alleviate some of the issues that have been plaguing South Sudan during the war.