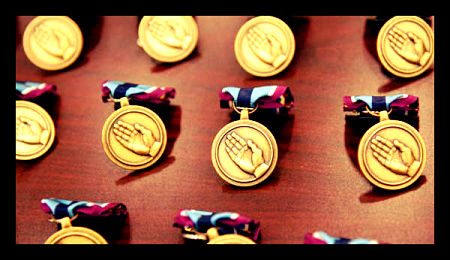 The Humanitarian Service Medal was created in 1977 by Gerald Ford, President of the United States at that time. Ford wanted an award established to recognize service members who go above and beyond the call of duty during national and natural disasters. The medal is awarded to people of the U.S. Armed Forces.

It is earned when a service member gives help to others during a time of need that is not part of normal duties and standards. The service member must also be active duty status to receive the medal. The humanitarian medal is a bronze medallion bearing a facing up palm on one side, which symbolizes “a helping hand.” The other side adorns an oak branch.

Recently, 5,600 members of the Minot Air Force Base have been approved to receive the humanitarian award.

In 2011, North Dakota cities Minot Burlington and Velva, respectively, became severely flooded by the Souris River. Over 4,000 homes were destroyed and 11,000 people were displaced. Over 5,000 airmen of the Minor Air Force immediately responded to the need for help.

They began filling and loading sandbags for the levies. What was truly a humanitarian gesture was when the service members offered their own homes to the displaced townspeople.

Another selfless act arose when employees who worked on Fort Hamilton base received the Humanitarian Service Medal for their help during Hurricane Sandy. The civilian workers turned the base into an emergency services area for people in need.

Medal recipient Francis Mitchell explains that, “Fort Hamilton is the only military installation in the metropolitan area, so in the event of a crisis, in order for the military to be able to coordinate their work they need a staging ground.”
Marines deployed to the Philippines during the typhoon in 2010 have also been approved to receive the humanitarian medal.

Typhoon Juan killed dozens of people and displaced over 200,000 people due to millions of dollars of destruction.

The humanitarian service medal exudes leadership to all members that adore it. Being a humanitarian is something everyone should be proud of and excel toward in life.

Whether one’s humanitarian actions are geared toward helping combat global poverty, volunteering during a natural disaster, or administering vaccines to impoverished children in Africa, it is always in need. If the world is going to become a better place, humanitarians must continue to be on the front lines.