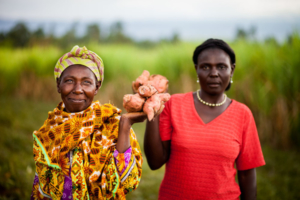 More than 60 percent of Sub-Saharan African women work in the agricultural sector and contribute to nearly 80 percent of the food supply. However, they only own 15 percent of the land. These women are the backbone of their families’ and communities’ agricultural production. They are still facing tremendous hardships and barriers due to their gender that limits their rights and opportunities. Hence, supporting and empowering African women farmers is necessary for Africa to be able to reach its full potential.

The U.N. has estimated that if women have equal access to opportunities and resources, they can increase yields on their farms by 20-30 percent. This will raise the total national agricultural output by 2.5 to 4 percent. Below are a few initiatives that work towards empowering African women farmers.

The majority of women in Sub-Saharan Africa have limited property rights. They are only able to access land through a male relative. This gender disparity in landownership leaves the women farmers vulnerable at the constant risks of displacement. Death of the husband or father and a simple change of the man’s mind can take away the means of the women. With such insecurity, long-term investments in enhancing the productivity of lands do not seem appealing or make much sense to African women farmers.

Ending gender discrimination in land ownership can empower women to earn more and contribute more to the economic growth and food security of the community. In Tanzania, women with strong property and inheritance rights can earn up to 3.8 times more income. Compared to men, improving landowners’ tenure security for women can have a much more positive impact. The World Bank reports that rights improvement can lead to women increasing investments in their lands by 19 percent.

Many countries have taken important steps to promote and protect women’s land rights when they realize the impact of women on the economy. The government of Ethiopia has mandated joint land registration between husband and wife, formally recognizing women’s rights to their farmlands. Such reforms have led to increased investments in their land.

Lack of access to credit and financial services is another major obstacle for African female farmers. Without sufficient finance, women farmers are unable to afford adequate inputs to advance their agricultural activities. Many different development agencies and NGOs designed and provided women-focused financial services and programs. Additionally, they want to improve their access to agricultural inputs.

Another micro-finance institution based in Mali, Soro Yiriwaso, supports women in boosting food security. More than 93 percent of the institution’s borrowers are women. Additionally, over two-thirds of the loan go into agriculture. The institution also gave agricultural loans to women members in 90 villages between 2010 and 2012. This enables farmers to have access to agricultural inputs and increased investments.

U.N. Women has recently launched a project funded by Standard Bank Group known as Contributing to the Economic Empowerment of Women in Africa Through Climate Smart Agriculture. The project seeks to close the gender gap in agricultural productivity and has a commitment to empowering African women farmers by increasing women’s access to markets.

Standard Bank commits around $3 million for the project, with Malawi receiving $450,000. Many expect that over 50,000 women in Malawi, Nigeria, Uganda and South Africa will benefit from this three-year-project.

Many have recognized agriculture as the sector most able to provide sustained economic growth and social inclusion in Africa. The agriculture and agribusiness combined have the potential to become a $1 trillion sector in Sub-Saharan Africa by 2030, with the likelihood of women continuing to be the backbone of the industry. Empowering African women farmers and closing the gender gap should be the focus and priority to help the African countries realize their full potential. In addition, this will effectively reduce poverty and attain sustainable economic growth.