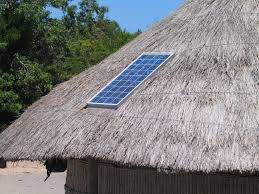 Global hunger has risen in each of the last three years. In 2018, the UN determined that the undernourished population had increased to nearly 821 million in 2017. Africa has the largest number, almost 21 percent of the population (more than 256 million people). The UN points to climate variability making agriculture more vulnerable as the main culprit. In countries like Malawi, where 80 percent of labor is agricultural, the entire country suffers from the advent of a flood or drought. Solar technologies in Africa could stabilize agricultural production.

However, solar technologies often require electricity, and in many countries, electricity is still a luxury. A World Bank report released in 2018 said that even by 2040, there could still be half a billion people in sub-Saharan Africa without power. Further, in many locations, the power grid is unreliable. Tanzania, for instance, has so many power outages in 2013 that the World Bank calculated it cost businesses 15 percent of annual sales. But if electricity could extend its reach to more people at a lower rate, irrigation systems, refrigerated storage and remote sensors that can help with storage and water-management could become possible.

The development of solar panels has offered hope, but the first wave of solar installations in the 1990s was fraught. Units were expensive, broke easily and were hard to fix. But over the last four decades, solar panels have improved. Increased cell efficiency has resulted in a 99 percent reduction in module costs since 1980. The cost of solar power has fallen from .35 USD per kilowatt-hour (kWh) in 2009 to less than 10 cents per kWh in 2016. In 2009, a single, fluorescent bulb and a lead-acid battery cost 40 dollars. Since 2017, using L.E.D. bulbs and lithium-ion batteries, light capacity is four times as strong. Add to that the World Bank stepped in with Lighting Global, an agency that tests and certifies panels, bulbs, and appliances to make sure that they work as promised. With the reduction in the cost of solar panels, there is renewed interest in the potential of solar technology in remote areas of Africa.

Aid from USAID joined with investments from Silicon Valley and European companies are flooding Africa in what the New Yorker deemed, “The Race to Solar Power Africa.” In 2016, the Guardian estimated investment had grown from 19 million in 2013 to two-hundred million in 2016. Nicole Poindexter, the founder and C.E.O. of Black Star, told the Guardian that with her model, one million dollars in venture capital delivers power to seven thousand people, and she expects it to be profitable by 2020. The International Energy Agency released figures showing that last year, half a million solar panels were installed around the world each day. Better technology is making investment possible.

Increased access to solar technologies in Africa presents a massive opportunity for countries with chronic food insecurity. Though by far the greatest number of solar panels being installed in Africa provide enough electricity for basic light, cell phone charging and television, some efforts are experimenting with agricultural interventions. Off-Grid held a contest for most efficient refrigeration units. A few countries have already undertaken experiments to see if cheaper solar power may improve agricultural stability in Africa.

Malawi is one of the poorest countries, with a per capita income of US$ 290, less than a dollar a day. Only 12 percent of Malawi’s 18 million people are connected to the main electricity grid—and only 2 percent in rural areas. Agricultural insecurity is great. A flood or drought can set regions of the country into famine as there is little safety-net. While there currently are few viable proposals for how electricity can mitigate floods, many have looked to irrigation for watering crops—something that requires significant electricity. For instance, Community Energy has installed units in rural communities in 2018.

Irrigation projects are on the rise in Malawi—many powered by solar energy. In Mwambo and Ngwerelo, and at villages in the Ntcheu district, solar panels are being used to pump groundwater from borehole wells into reservoir tanks capable of storing at least 10,000 liters. These pumps provide water for household use as well as irrigation. In 2018, Sharp Electronics donated a solar pump on the Shire River for irrigation that can serve 600 farmers.

Solar technologies in Africa are recent and still being rolled out, so results are unclear, but the potential is great. Along with explorations of solar irrigation and refrigeration, there is also a need to keep resource-use balanced between short and long-term goals, agricultural and household uses for water.