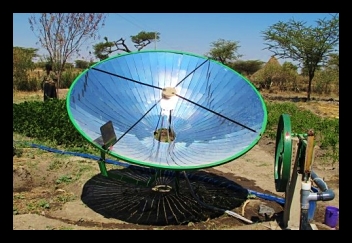 Scientists are developing a solar powered device which quickly produces steam, and could be used to sanitize things quickly and easily in places where a lack of clean water for washing makes it difficult to keep things sanitary.

The steam is generated by solar power, so this appliance can be used in places that remain off the grid. Heat conductive nano-particles are the key to this sterilization system, which float around in a tank of water and harness the heating energy of the sun, creating steam that is dispersed through a long tube. The efficiency of this system is impressive, as it is able to convert more energy than solar panels. Thanks to funding from the Bill & Melinda Gates Foundation, Rice University researchers have already built working prototypes, and are prepared to give their solar steam a trial run in Kenya to see how effective the new technology will be for families and villages.

Lack of proper sanitation continues to be a major problem in the developing world, with 2.5 billion people living in dangerously unhygienic conditions. For many people, toilets, safe and reliable waste disposal, and sinks for hand-washing are luxuries rather than the norm. Without access to these basic technologies, which those in the developed world often take for granted as mundane and commonplace, billions of people go about their daily routines with high risk of contracting deadly bacterial diseases. Proper waste disposal systems saved burgeoning Western cities like London from recurring cholera epidemics at the turn of the 20th century. But today 2.1 billion people in the world still rely on unsafe waste disposal systems, and contaminated drinking water continues to plague the world’s poorest places.

For more information on steam sanitation technology, check out this video from the Rice University website to see the system in action, as it converts water and sunlight into bacteria-killing steam.