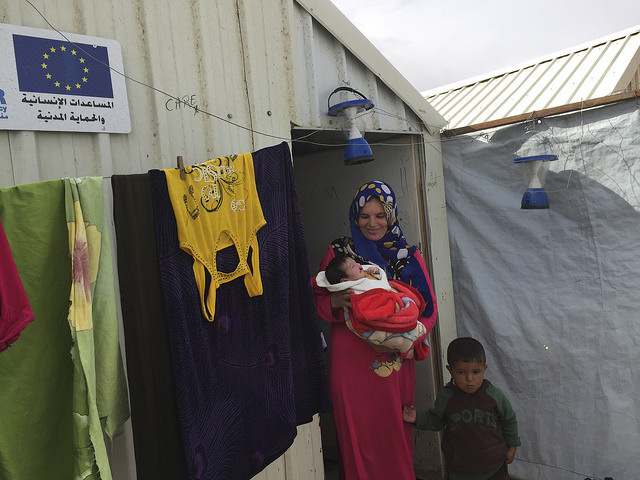 Escalating conflicts around the world, particularly in nations such as Yemen, Nigeria and Somalia, has led to a global refugee crisis. According to the United Nations Refugee Agency (UNHCR), there were 65.3 million displaced people around the globe as of December 2015, a number which includes refugees, asylum seekers and those internally displaced within their own countries of origin. Addressing the needs of refugee camps, which include medicine, food, clean water and electricity, is no small task. Renewable energy in the form of solar panels in refugee camps, however, can help to address one or more issues surrounding dire conditions in these makeshift communities.

Jordan’s Zaatari camp, which houses over 100,000 refugees and asylum seekers, recently installed solar-powered street lamps in and around sanitation and toilet facilities, with the help of Oxfam Canada. Not only do these lamps use a 100 percent environmentally friendly source of power to operate, but they also make these facilities safer to use at night.

The Zaatari camp is by no means the only, or even most prime, example of solar panels in refugee camps providing help to tens of thousands of people.

The Azraq camp, also located in Jordan, is powered completely by renewable energy derived from solar panels. A two-megawatt solar plant, funded by the Ikea Foundation, supplies electricity to over 20,000 refugees living within Azraq’s shelters free of charge. Its energy is used to power fridges, fans, televisions and cell phones. Not only is the solar plant capable of immediately saving the UNHCR $1.5 million per year, but a planned output upgrade from two to five megawatts means that soon electricity will be available to all 36,000 residents in Azraq.

Solar panels in refugee camps also show a promising, optimistic future for the non-refugee population of Jordan as well.

According to Ala Qubain, the head engineer at Mustakbal (the firm that constructed Azraq’s solar plant), once the camp is no longer needed by refugees and asylum-seekers, the power plant “will remain as a contribution to Jordan to reduce its dependence on foreign fuel supplies.”

Unlike its neighbors, Saudi Arabia and the Gulf States, Jordan does not have an abundant supply of oil reserves to power homes and businesses and has struggled with electricity supply in the past. Now that solar panels in refugee camps have proven to be both effective and cheap, the push for renewable energy practices in Jordan, and possibly the wider Middle East, have been reinforced.

It is often difficult to find a positive message in the world’s refugee crisis, with figures and statistics of those displaced and struggling continuously rising. The effect of solar panels in refugee camps, however, has both short- and long-term benefits.

Neighborhoods are made safer at night for women and children thanks to solar-powered lamps. The energy source’s cheap implementation and maintenance is economically viable for businesses and the implications of the future use of solar panels are nothing short of positive and promising.