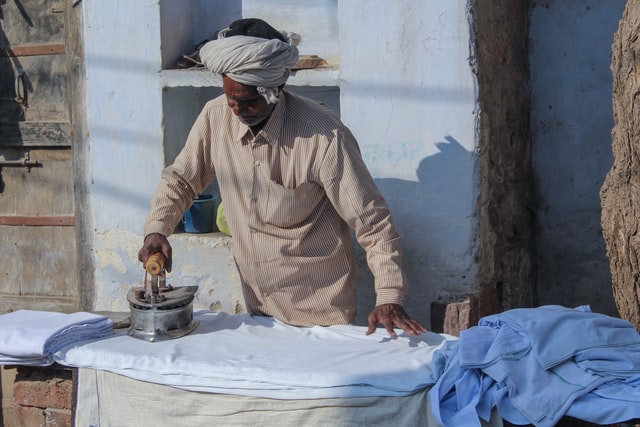 India possesses the second-highest worldwide population with 1.2 billion people. Poverty in rural areas leaves local Indians unable to find job security. They instead must resort to street vending. Approximately 10 million street vendors exist in India, with many representing the laundry and textile industries. In particular, impoverished Indian families tend to choose the path of ironing clothes, a lucrative business considering the needs of everyday workers. However, there is one downside of the traditional method of ironing clothes in India: charcoal powers the irons. Luckily, a 14-year-old girl named Vinisha Umashankar recognized this energy source’s impact on the environment and innovated a solar-powered iron to create a renewable alternative to coal in India.

The Importance of Street Vending in India

Two kinds of retail industries exist: organized and unorganized retail. The latter represents the main retail industry in India. Unorganized retailers lead a solid 97% of businesses in the country, including local stores, family-run shops and street vendors. The sector of unorganized retail is the second-largest source of employment in India following agriculture. This demonstrates how much these workers crucially rely on their jobs for financial security. Those who have education but are jobless, or who suffer from poverty, benefit from the consumer familiarity and low-cost structure of the unorganized retail sector. Additionally, Indian small-store retailing generates self-employment relatively easily and does not require much investment in labor, land or capital.

Early Indian society used a coal-fuelled iron box to smooth out clothing. Street vendors who iron clothes rely heavily on coal to power their equipment. There are some 10 million ironing carts in India and each cart uses more than 11 pounds of charcoal daily.  Given the hot and dry summers in India, cotton clothing requires washing and ironing on a daily basis. The high demand for ironing is escalating the use of coal and intensifying the smog issue in India.

The monsoon season from June to September poses an additional threat to the quality of the environment. Due to heavy rains, the coal becomes damp, causing an increase in the total weight bought by vendors. The moisture of the water, however, also reduces the warmth the charcoal produces when burned. Also, in the winter, as the price of coal naturally rises, suppliers purposefully add additional water to extend their product. Therefore, intense rain means increased spending on coal for the irons, further intensifying the cycle of Indian poverty.

Coal supplies approximately 72% of India’s electrical needs. The reliance on coal energy presents challenges regarding rising smog levels and respiratory conditions in cities. Coal power plants emit toxic gases and particulate matter that can penetrate human lungs. A reaction between sunlight and the nitrogen oxides that coal-powered plants release causes smog. The more people burn coal, the more smog that will emerge. However, coal is still a cheaper alternative to other, cleaner, forms of energy in India. Most people do not have the means to finance renewable energy.

Vinisha Umashankar, an Indian teen with great concerns for the Indian air, developed an alternative to coal-powered irons. She suggested that they use solar-powered irons to harness the energy in the sun. This innovation promises to improve the poverty associated with the ironing industry as well as the environmental issues it causes. India receives enough sunlight to produce solar power 3,000 times more than its total current energy consumption. Her innovation to eliminate the use of charcoal in the ironing industry received the Children’s Climate Prize, comprising 100,000 Swedish krona ($11600) to further aid the project.

Umashankar also developed a solar-powered street cart. Similar to the solar-powered iron, Umashankar designed the model with functionality and cost-efficiency in mind. Individuals can use the cart effectively after only 15 minutes of tutorials. The solar-powered batteries charge in under five hours and last for six hours.

Overall, the goal of the solar-powered iron and cart is to improve the economic and health outcomes of the street vendors working in the ironing industries. In the long run, with further innovation, Umashankar intends to develop a cart prototype with solar panels and batteries that could last up to eight years. This ambitious plan favors sustainability for two parties: vendors and the environment.

With innovations like Umashankar’s solar-powered iron, India shows promise for improved environmental conditions and reduced poverty rates. Although expensive, new technologies are constantly emerging and individuals as young as 14 years old are working to prioritize cost-efficiency and sustainability. Given the fact that street vending is a widespread market in India, a solar-powered iron has the potential to transform the harmful coal-sourced iron industry into one that is profitable and environmentally conscious.