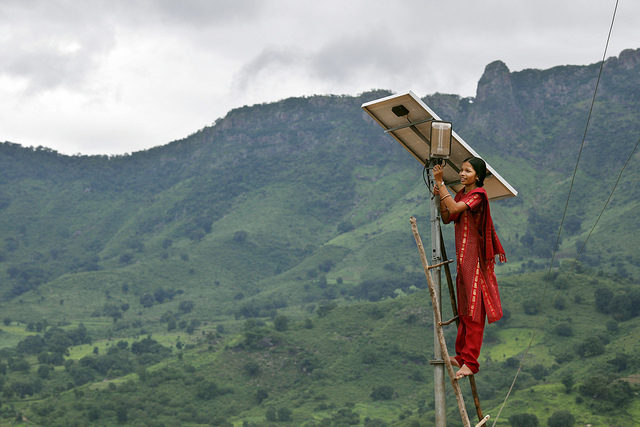 India has launched its largest solar power project with an aim to meet the target of 100 gigawatts (GW) of solar electricity by 2022. The project has been initiated with the collaboration of the State Bank of India (SBI) and the World Bank Group (WBG). According to India’s Prime Minister Narendra Modi, “the world must turn to the sun to power our future.”

According to the estimate of the International Energy Agency (IEA) conducted in 2015, up to 300 million Indian households don’t have access to regular electricity. People from rural areas are the most affected by this situation. Even those who are connected to the central electrical grid also suffer from intermittent electrical outages.

According to the World Bank, India is the place of the world’s largest “un-electrified population.” This brings problems in public health, education and small-scale industries. With no power, storing drugs and vaccines in refrigerators becomes difficult. Problems in hospitals and emergencies become evident, and everyday health hazards occur as people burn kerosene, coal, wood and diesel to provide light. Education in villages suffers a lot as many children have little to no light after dark.

The solar power project comes with the potential of addressing the deficiency of electricity and providing clean renewable energy for the mass population. Of the 100 GW of solar power capacity, 40 GW will be generated from a rent-a-roof program and the rest from solar parks.

In a rent-a-roof program, the developers will rent the roof on lease from individual households and feed the power to the grid. The maintenance of the whole setup will be done by the developers. The solar industry welcomes this prospect, although a framework for this policy has not yet been defined and there is a concern regarding its implementation by 2021.

The rent-a-roof policy is also facing a challenge in several big cities like Chennai, Mumbai and Delhi where the installation is slow. The rooftop solar panels have mainly been installed on government, institutional and commercial buildings as opposed to individual households.

At present, the rooftop solar power project needs a boost but it has tremendous potential in the solar energy market. It is considered an important alternative source for fulfilling the current deficiency and will help in lowering the cost of electricity for middle-class and poor citizens.

India has also taken initiative in setting up the solar parks that will generate 60 GW of electricity. The International Finance Corporation (IFC), a member of WBG, is assisting the Indian government in setting up a 750 MW solar power project in Rewa, Madhya Pradesh.

Pavagada solar park in southern Karnataka is considered one of the largest solar parks in the world. It is spread over 13,000 acres and will generate almost 2000 MW of electricity by September 2018. The solar park is aiming to reduce 20 million tons of carbon dioxide emissions per year and save 3.6 million tons of natural gas.

The park has been built on barren farmland leased from farmers thus providing a substantial sum of compensation. Apart from providing income to the farmers, the park has generated 4,000 jobs.

India, being a tropical country, can capitalize on its solar power and provide cheap, clean and renewable energy for millions of its citizens who are deprived of electricity. The solar power project will definitely boost this effort.