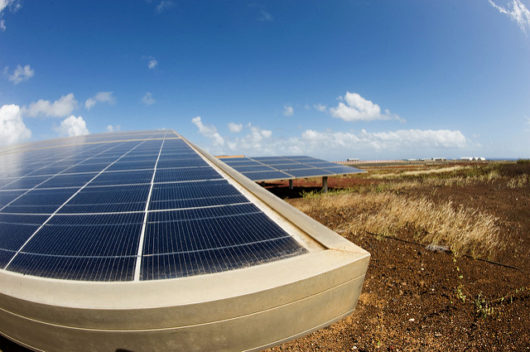 Solar Power in Kenya is helping farmers in this Eastern African country sustain agriculture and save money. Solar-irrigation makes perfect sense in Kenya, considering the low rainfall and ample sunshine in the country.

East and Central Africa’s largest solar power plant will soon be completed in Kenya and will be producing 54.64 megawatts of electricity into the national grid. This is the first time Kenya will develop a major solar power plant to harness the abundant solar energy available in the country in order to reduce energy costs.

The objective of this project funded by the World Bank is to increase access to electricity services in underserved counties in Kenya. The solar project is intended to achieve the government’s objective under Vision 2030 that aims to transform Kenya into an industrialized middle-income country.

It is estimated that four out of five families in Africa depend on agriculture for their livelihoods, but only 4 percent of families utilize irrigation and instead rely on scarce rainfall. Switching to irrigated agriculture increases yields up to 90 percent when compared to rain-fed farms, but high diesel costs make irrigation unaffordable for smallholder farmers.

In 2015, the USAID funded Kenya Smallholder Solar Irrigation (KSSI) project. Two solar-powered water pumps were distributed to two farmers over a three month period as a test for the project validity. The study concluded that one farmer could expect an increase in gross profit of 350 percent after paying off a 22-month loan, and the other farmer was projected to have a 235 percent increase after paying off a two-year loan.

The Co-Operative Bank Foundation is partnering with the MasterCard Foundation on a program that will attempt to distribute loans to about 2,500 Kenyan farmers over the next three years. The initiative will be rolled out through some of the bank’s 12,000 cooperatives that distribute loans to members using a group repayment approach. The Co-Operative Bank Foundation will also use the program to educate farmers about financial literacy and how to utilize technology for their own financial needs. These funds will be directed toward pump fundings.

The world’s first solar-powered water pump with a five-year warranty was launched in October 2017, in Kenya. This pump is called SF2 pump and it is capable of delivering up to one liter of water per second. It is smaller, more powerful, more robust and remotely monitored in comparison to standard water pumps. The SF2 can deliver up to a liter of water every second, and lift it up 30 feet vertically. This provides a farm with over 21,000 liters of water per day, whilst avoiding any fuel costs.

Kenya is prepared to spend $2.1 billion on electrification in rural areas focusing on renewable powered mini-grids. As part of the nation’s 2016-2021 strategic plan, the Rural Electrification Authority (REA) aims to install around 450 mini-grids powered by solar sources. It is estimated that about 25,000 to 30,000 solar PV products are traded annually in the Kenyan market and that at least every household has owned at least one solar PV product.

Solar Power in Kenya is being implemented at a fast rate and will continue to save farmer’s money spent on irrigation and fuel costs. The efforts to give loans to farmers to buy solar-powered irrigation pumps is a smart investment to help thousands of farmers save money.