Childbirth can present risks anywhere in the world. However, in developing countries, giving birth can often be lethal for both mother and child. The most common causes of infant mortality include infections, premature birth, or birth asphyxia, while maternal deaths are usually the result of severe bleeding or high blood pressure during pregnancy. Effective care before, during, and after childbirth is necessary to treat such complications, but many areas lack the basic resources to provide such care.

In 2008, Dr. Laura Satchel traveled to Nigeria to research possible methods of lowering the country’s maternal death rate, which currently stands at 630 deaths per 100,000 births. Nigeria also has the 10th highest infant mortality rate in the world, with 74.09 deaths per 1,000 births. While working in state hospitals, Satchel realized that many of these deaths were not simply due to illness, but unreliable electricity interfering with the doctors’ ability to treat their patients. Nighttime deliveries were often illuminated only by candlelight, cesarean sections were frequently cancelled or conducted by flashlight, and patients were forced to wait days for life-saving procedures that could not be performed without electricity. This resulted in many deaths from treatable conditions.

Satchel’s goal was to come up with an affordable solution. She contacted her husband, Hal Aronson, a solar energy educator in Berkeley, California. Aronson began designing an off-grid solar electric system, specifically intended for use in maternity wards and labor rooms. This resulted in the development of the Solar Suitcase.

The Solar Suitcase is a bright yellow pack containing high efficiency LED medical lighting, a universal cell phone charger, a battery charger, and outlets for 12V DC devices. The maternity kit also includes a fetal Doppler. The suitcase is designed to last between 10 and 20 years, only requiring a battery change every two years. When Nigerian health clinics began receiving the suitcases, doctors were immediately able to charge headlamps and walkie-talkies while they waited for larger solar installations at their facilities.

In 2009, Satchel and Aronson founded the non-profit organization We Care Solar, aiming to improve the design of the Solar Suitcase and distribute them to more clinics in need. In 2014 alone, the suitcases are estimated to have served 256,800 mothers. As of November 2014, approximately 900 suitcases had been distributed to 25 countries worldwide, from Sierra Leone to Malawi.

Although the suitcases are primarily used in maternal health clinics, they have also saved lives in the wake of natural disasters. We Care Solar sent the device to Haiti after the 2010 earthquake at the request of medical relief teams.

Currently, the organization is in the process of sending 100 suitcases to Nepal, where thousands of pregnant women are in need of medical care following the recent string of earthquakes. In the coming months, We Care Solar plans on expanding its programs in Ethiopia, Tanzania and the Philippines. In a world where mothers and newborns die each day from preventable causes, devices like the Solar Suitcase provide doctors with the tools they need to give women and their children a chance at life. 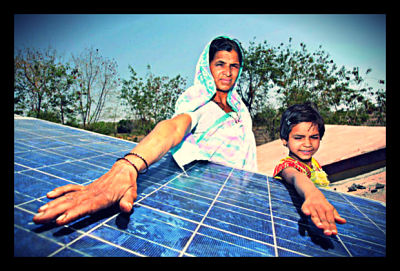 According to the World Bank, more than 400 million people in India still live without electricity. This represents more than a third of India’s population. However, a proposed solar plant might be able to put a major dent in that number.

The plant is planned to triple India’s current capacity, and would be the largest solar plant ever built. Nature News reports that the plant will be ten times larger than any plant currently operating and will cover an area larger than Manhattan.

The project is a joint venture between multiple companies with the target price set at $4.4 billion. Planners estimate that the project will take 7 years to complete at a site in northern India.

The new solar plant is expected to produce 6.4 billion kilowatt hours per year, 2.2 billion more than the Hoover Dam in the U.S. However, it is only part of a larger, national commitment to solar power known as the Jawaharlal Nehru National Solar Mission (JNNSM).

In 2009, India embarked on a $19 billion initiative to become the global leader in solar power production. By 2020, they aim to have solar lighting available in 20 million households and to have reduced CO2 emissions by nearly 50 million metric tons annually.

The World Bank and many others argue that without access to power: development, growth and prosperity are outside the grasp of those living in poverty. In India, nearly two-thirds of the population still lives on less than $2 a day. The government reports that roughly a third are below the poverty line, and of these, the vast majority live in rural areas.

For those living without power in India, the transition into the electric world will redefine their lives and create opportunity. From infrastructure development to studying for school at night, electric power is essential to becoming a developed economy.

Additionally, the development of clean energy resources that produce such tremendous amounts of energy (as the proposed plant) are likely to position India to help its poorest citizens rise from poverty.

Not only that, but sustainable practices will undoubtedly set a tone for India’s energy future. With developing nations currently atop the list of global polluters, it seems critical that changes be made in the practice of energy consumption. 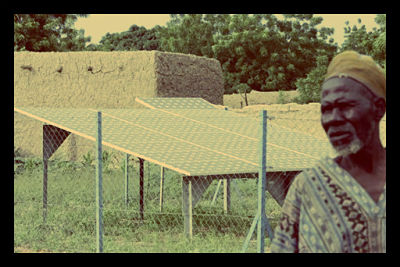 One of the most important indicators of development is access to electricity. Electricity is considered a fundamental and basic element of developed society. There is a huge movement to provide communities without electricity with the means to obtain it.

In many underdeveloped countries, the easiest way to obtain electricity is by solar energy. Many of these areas do not have the infrastructure nor the resources to create mass electrical plants like those in Europe or the United States. Solar panels are a cost effective way to produce electricity anywhere.

Azuri Technologies is providing many families in Africa with a cheap way to obtain electricity. There is a one time installation fee and then a weekly charge of little over $1. This is important because these families currently have to use kerosene which costs much more than the expenses of the solar panel.

The phone situation is one example of how access to electricity leads to development. If communities do not have phone access, they have to refer back to traditional means of communication or using phones that are long distances away.  The access to electricity is giving them the tools to advance.

One large impetus to use solar panels is that there is a lot of sun! Fossil fuels are extremely expensive, especially in underdeveloped countries. The sun is a resource that does not cost money and does not run out. Sunlight does not need to be transported and it cannot be stolen, which is a problem with fossil fuels.

The use of solar panels is one way that underdeveloped areas can be brought into the developed world. It is not the only solution to development or poverty, but it is a piece to the puzzle that can put everything in motion. 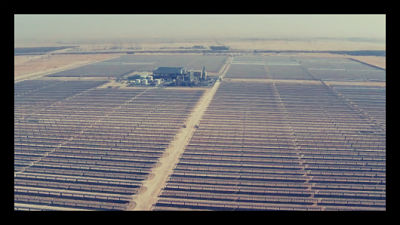 Abu Dhabi has used its oil profits to open the largest solar power plant in the world. The United Arab Emirates is among many Middle Eastern nations, including Saudi Arabia, to focus on solar energy development. The plant cost about $750 million and will provide 20,000 residences with electricity.

The energy produced by the plant, called Shams 1, will increase Abu Dhabi’s renewable energy source consumption to 7% of its total energy consumption. The plant is part of what the head of Abu Dhabi Future Energy Co., Ahmed al Jaber, called a “strategic plan to diversify energy sources in Abu Dhabi.” It is the first of several plants scheduled for development in the coming years.

Shams 1 has a similar design to California’s Solar Energy Generating System (SEGS). Even though Shams 1 is the largest single plant, the nine SEGS plants combined generate three times as much energy.

The irony of Abu Dhabi’s use of its oil money cannot be overlooked: by investing in solar energy development for its own electricity needs, Abu Dhabi will be able to export even more of its bountiful oil resources. Shams 1 will eliminate 175,000 tons of carbon dioxide each year, the equivalent carbon dioxide production of 15,000 cars.

But how many more cars across the globe will the city’s oil reserves enable to run, even as Abu Dhabi cleans up its own energy usage?