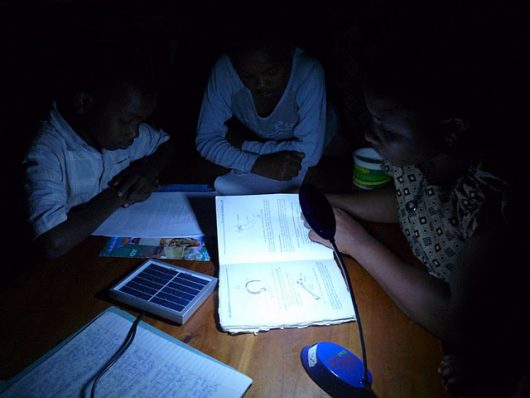 A lot of the rural cities or areas do not have electricity because they are not nearby to an electricity grid. People in Tanzania, like Lusela Murandika, power TV sets with diesel generators and other parts of their homes with charcoal, wood and other biomass.

Using resources like coal, charcoal, dung or wood as a source of electricity pollutes the breathable air that is needed to survive. According to the World Health Organization, 3.8 million people a year die from illnesses that are tied to air pollution.

Kerosene used in lamps is also a dangerous product to use. It produces soot and toxic smoke that “damages lungs and causes other serious health problems,” according to National Geographic. The use of kerosene lamps, especially ones that are homemade, are dangerous because thousands of children and adults die or are burned from them.

How Solar-Powered Appliances Are Changing Things

Technological advancements have made it easy for solar-powered appliances to become more readily available to purchase. Something as simple as a solar bottle light bulb runs around $2-3.

The solar bottle light bulb is “made out of a plastic bottle of purified water and bleach, [that] is sealed into the roof,” according to National Geographic. The water allows for light to be spread out in the room and the chlorine keeps mold from growing. The solar bottle light bulb not only works with the sunlight but it also works when the moonlight is strong as well. It allows for the people in the home to be able to do more within the household, like study, read or work inside.

Connecting people that live in rural areas to an electrical grid sometimes is not possible or it becomes too expensive to be able to afford. Electricity then becomes a luxury that people cannot afford. Sometimes, people wait years for a grid to be built near them, but having solar-powered appliances allows for them to have access to that technology much sooner.

In 2016, four U.S. foundations announced an initiative “to support efforts to bring reliable ‘off-grid’ or ‘mini-grid’ power—fueled by solar energy—to people in India who now are without it,” according to Think Progress. The foundations include Hewlett, the David and Lucille Packard Foundation, the Jeremy & Hannelore Grantham Environmental Trust and the John D. and Catherine T. MacArthur Foundation. All four foundations have initiated a $30,000,000 initiative to fund the program and the Indian government is set to match this.

Furthermore, a company by the name of Easy Solar is helping provide electricity to the residents of Sierra Leone. This company is lead by Nthabiseng Mosia, Alexandre Toure and Eric Silverman. Easy Solar began in 2015 as a response to energy accessibility in Sierra Leone. In an interview from Business Report with Nthabiseng Mosia, she stated, “It’s often widely publicized that two-thirds of sub-Saharan Africans lack access to electricity. But in Sierra Leone, 90 percent of people (and 99 percent in rural areas) don’t have any electricity.”

With Easy Solar, appliances are set up so that consumers are on a rent-to-own basis, providing weekly payments. Some of the devices that the business offers are lights and mobile chargers as well as solar lanterns that have the capability of charging phones and offer more than 24 hours of light. The company’s appliances are not just limited to households but are also for businesses as well.

There are many organizations on the ground that are helping individuals obtain the necessary materials to be able to survive that will not cost them their lives. Solar-powered appliances are one solution that is helping eradicate poverty.