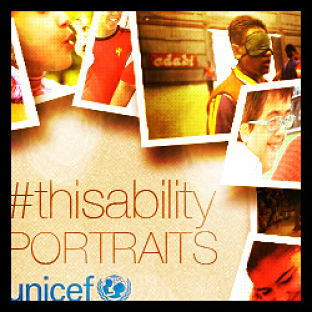 This year’s State of the World’s Children Report, released by UNICEF, focuses on children with disabilities. The adjoining social media campaign has recently gained a lot of traction on Twitter, Facebook and Instagram in raising awareness about the surprising facts surrounding children and disabilities worldwide.

The campaign, marked by the hashtag #ThisAbility, encourages people to submit pictures of people overcoming their disabilities in astounding ways. The top 15 photographers will have their work displayed at UNICEF’s Manhattan headquarters, and the top 5 will receive a variety of UNICEF gear.

Nearly 100 million children suffer from a mild or severe disability, according to the report. Though this figure is largely speculative, they add up to 1 in every 20 children aged 14 and younger. While disabilities come in varying degrees, the similarity “lies [in] the shared experience of being defined and judged by what one lacks rather than by what one has.”

Children with disabilities are often seen as inferior to their peers without disabilities. They experience discrimination and marginalization on a daily basis. This is mostly due to a lack of awareness by governments about the extent of the problem.

“Few countries have reliable information on how many of their citizens are children with disabilities, what disabilities they have or how these disabilities affect their lives,” according to the report. Families oftentimes don’t report their child’s disability for fear of ostracism by the community. Because the government is unaware that these children exist in such a great number, the public services never reach those who need it most.

The report ends on a hopeful note: “Disability does not mean incapability: It is the wonderful diversity that enriches humankind.”