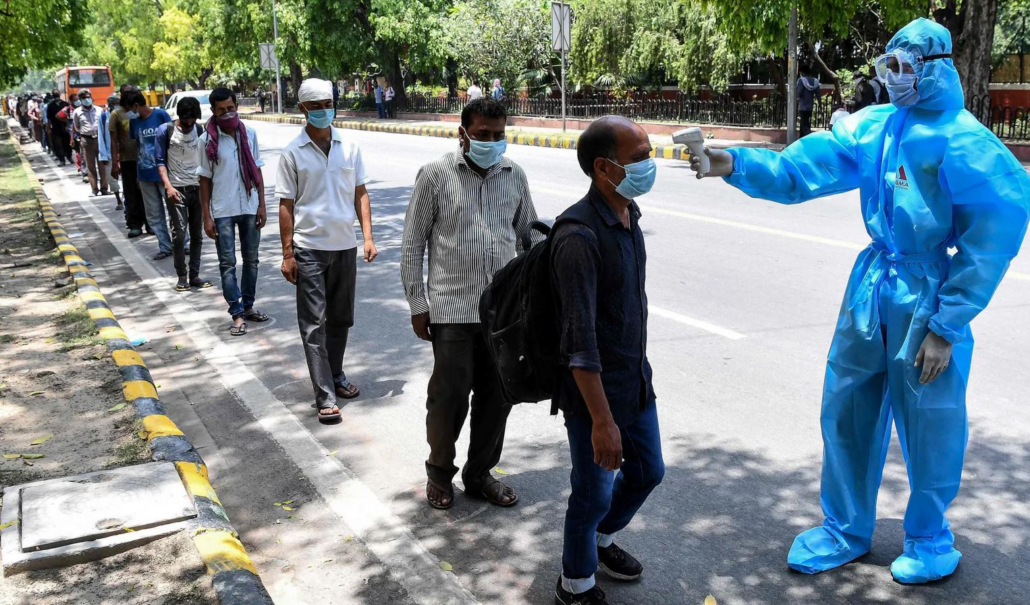 The COVID-19 pandemic has been devastating to nations all over the world, but especially the Global South. India, for example, has an enormous population of 1.3 billion people, with labor forces large enough to create the world’s fifth-largest economy. However, as of September 3, 2020, total confirmed cases across the country had reached 3.85 million, with 67,376 total deaths. As COVID-19 spreads throughout India, it leaves behind long-term effects on issues from medical resources to economic scarcity.

Even before the COVID-19 pandemic in India, economic disparity existed in many forms. In 2019, the average per capita monthly income was approximately 10,534 Indian rupees.

To put this in perspective, 10,534 Indian rupees equals $143.42 USD, meaning the annual income of the average Indian citizen was just $1,721.04. Over the past five years, India’s unemployment rate has been increasing steadily, but in April 2020, it skyrocketed to 23.5%. Factories and construction sites, known for housing and feeding temporary employees, threw their workers onto the streets. About 95% of employed women worked in informal positions, but many lost jobs as households and businesses determined outside workers were too dangerous. As restrictions are slowly lifting across the country, frightened people return to work because fears of starvation hold more weight than fears of COVID-19 infection.

For those in need of COVID-19 medical care, options for help are slim. According to reports from The New York Times, public hospitals are so immensely overwhelmed that doctors have to treat patients in the hallways.

For those with non-COVID-related medical needs, options are almost nonexistent. On March 24, Prime Minister Narendra Modi announced that to “save India,” a nationwide lockdown to curb the spread of the virus is necessary as well as the postponement of non-essential surgeries. For Ravindra Nath Singh, a 76-year-old man with Parkinson’s, this meant being discharged from the ICU in a hospital in Lucknow just minutes after becoming stable on a catheter and feeding tube. For a young woman in New Delhi, this meant eight hospitals turning her away while in labor for 15 hours, only to die in the back of an ambulance.

The spread of COVID-19 in India forced schools to shut down, which proved unhelpful to students’ already low attendance rates. According to a study in 2018 by DHL International GmBH, India hosts the highest population of uneducated children with a  staggering 56 million children out of school. As restrictions across the country lift, one of the biggest hurdles will be encouraging enrollment, especially with uncertain learning conditions. Enrollment hesitation enables another widespread issue in India: child labor. Experts claim the most significant spike in child labor is yet to come as immense economic losses will compel large corporations to seek cheap labor.

The lack of in-person education also has a significant impact on child mental health. An Indian girl, 12-year-old Ashwini Pawar, once had dreams of becoming a teacher, but now must reconsider her life’s ambition. In an interview with TIME magazine, she considers her family financial burdens, saying “even when [school] reopens I don’t think I will be able to go back…” These circumstances push concerns of economic inequality as the pandemic might dissolve great strides made in development over the past decade.

In very little time, India has become the new epicenter of the coronavirus. The daily number of confirmed cases shot up from about 40,000 to 80,000 in just a few weeks. Unlike most of the world, this virus is heavily affecting the workforce demographic. More than 50% of COVID-19 deaths in India have occurred between the ages of 40 and 64, an interesting contrast to developed countries where 70% of deaths have occurred in age groups 70 and older.

According to Sanjay Mohanty, a lead scientific author from the Union Ministry of Health and Family Welfare, this contrast is due to India’s age distribution. Mohanty states, “the median age in the country is 24 years and therefore more younger people are available for virus transmission…” Unfortunately, the road to recovery is a long one as millions of people are still susceptible to infection.

Despite the seemingly daunting situation, there are many reasons to have hope for India. Well-known organizations such as UNICEF and Give2Asia are focusing aid on India, pushing the nation’s needs into the limelight.

Newly-risen charities are also making impressive strides on the ground. Snehalaya ‘Home of Love’ is a charity based out of Ahmednagar dedicated to feeding impoverished families during the pandemic. In Ahmednagar’s 17 official slums, the organization has fed more than 17,000 families and raised more than $80,000 of aid in just six months.

Hope also goes beyond organized help. As seen in various reports, neighbors are sharing all types of resources, from food to hygiene products. Amid a global pandemic, and even beyond it, India’s path to healing will accelerate with charity aid and attention.